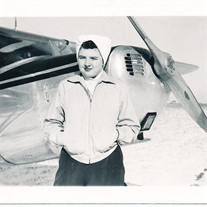 Linda L. Sabata, 84, of David City was called to Heaven on Tuesday, December 22, 2015. Per Linda's request there will be no public services. A private family graveside will take place at a later date. Linda Lou (Vanderkolk)Sabata was born on November 5, 1931 as the only child of Kenneth E. and Phyllis(Rominger)Vanderkolk. She loved growing up on the family farm. Linda attended Prescott School for the Deaf in Lincoln for three years where she learned to lip read. She then attended David City North Ward School and was a proud 1950 graduate of David City High School. In June of 1947, Linda began flying lessons, taught by her father's cousin, Russel Vanderkolk. On November 16, 1947, at the age of 16, she became the first and youngest girl in Butler County to pilot and solo her airplane, landing in deep snow on skis. Linda married Johnnie R. Sabata on February 22, 1953 at St. Luke's United Methodist Church in David City. In 1967, they adopted a baby girl. Together, they raised their only child, Lisa LuRae and gave her a wonderful life. Linda was a member of the Girl Scouts, Lucky 7 4-H Club, Extension Club, Blue River Square Dance Club, Coast to Coast bowling team, Rebekah Lodge #18, Eastern Star Alma Chapter 20, Butler County Arts Council, Red Hats and a life long member of St. Luke's United Methodist Church. She worked in various positions at Fiesta Motel, Pizza Hut, ASCS Office, DC Manufacturing and retired from david place after 11 years in housekeeping She loved farm life, her cats, dogs, pony, cattle and showing her grand champion breeding heifers. Linda was a lover of all animals and nature. She enjoyed reading, traveling, knitting, embroidery, quilting, and being with close friends. She was always interested and involved in her daughter's school activities and Job's Daughters. She enjoyed taking Lisa and her friends to Worlds of Fun in the summer. Linda was a loving and devoted mother and she will be greatly missed. She was at peace going home to see God and all of her loved ones and animals that had gone before her. She can now hear the things she loved: rain, thunder, birds singing, a cat's purr, and her daughter's laughter. She is survived by her daughter, Lisa LuRae Sabata of David City and her dear darling cats . Memorials suggested to the Hruska Public Library. At Linda's request, no services are planned. A gathering of close friends and family will be held at a later date. On-line condolences: www.chermokfuneralhome.com

Linda L. Sabata, 84, of David City was called to Heaven on Tuesday, December 22, 2015. Per Linda's request there will be no public services. A private family graveside will take place at a later date. Linda Lou (Vanderkolk)Sabata was born... View Obituary & Service Information

The family of Linda L Sabata created this Life Tributes page to make it easy to share your memories.

Linda L. Sabata, 84, of David City was called to Heaven on Tuesday,...

Send flowers to the Sabata family.