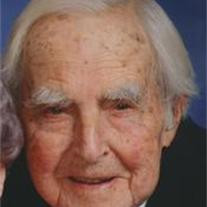 Leonard Piitz, 93, of Brainard, died Tuesday, September 10, 2013 at David Place in David City. Funeral Mass will be at 10:00am,  Friday, September 13, 2013, at Holy Trinity Catholic Church, Brainard.  Burial in Holy Trinity Cemetery.  Viewing will be Thursday from 5-7pm followed by a 7pm wake and rosary all the church.  Additional viewing will be Friday, from 9-10am at the church.  Memorials to Masses or In Care of the Family. Leonard John Piitz was born to John J. and Emma(Behne)Piitz on November 27, 1919, on the family farm west of Brainard. Leonard had three siblings, Lawrence, Lorraine and Leo. He was baptized, received his first Holy Communion and Confirmation at St. Francis Catholic Church, Center. Leonard attended country school north of the farm until 8th grade, and then attended Brainard High School where he graduated with the class of 1939. During his growing up years, Leonard was involved in showing hogs at the fairs and receiving numerous ribbons for his efforts.  He learned to farm at the side of his father.  Following graduation, Leonard farmed and was called to the service of his country on April 17, 1945.  After basic training at Camp Fannin, Texas, he was home on leave for a short time before training at Fort Riley, Kansas.  He left for Japan on October 3, 1945 to serve with the occupational forces in the 391st Signal Base Depot in Yokohoma, Japan.  There he worked as a mechanic and in the office.  He returned to the states on October 23, 1946 and was honorably discharged on December 7, 1946. Leonard was a member of the Brainard Rejda American Legion Post #273.  He later took advantage of the G.I. Bill and attended veterans school in David City, learning carpentry and electric skills.  Leonard spent his life as a farmer and professional musician.   Following his return from the army, he moved to the farm east of Brainard, where he resided until he moved into David Place.  Leonard was a grain farmer, raising corn, wheat, oats, alfalfa, milo and soybeans.  His favorite crop was wheat and he liked watching the golden heads of wheat waving in the wind.  He also raised hogs and cattle.  He especially enjoyed raising cattle and would be heard in the evenings, calling "come boss" for the cows to come home to the lot for the night.  Over Leonard's farming career, he has seen many changes.  Farming with horses and two row equipment to large tractors and machinery.  A special favorite of his was the spoker D John Deere which his father owned.  Leonard farmed on his own until retirement at age 91. Leonard's musical career began under the tutelage of Mr. Fred Semin at Brainard High School.  In 1939, Leonard and his brother, Lawrence, formed the Golden Star Orchestra and they performed at dances until disbanding in 1942.  Leonard then played a short time with the Albin(Beanie)Kucera Orchestra until being called into the army.  When he returned from the service, he played with Matt Sladky and Al Grebenick for a time and then played with the Ernie Kucera band for about 50 years.  When playing with Ernie, the band traveled to Texas, Oklahoma, Kansas, South Dakota, North Dakota, Minnesota, Wisconsin, Michigan, Iowa, Ohio and Colorado.  They also performed in Canada, and in 1983 went on a 10 day Tour of Music to Czechoslovakia and performed with  the Budvarka Orchestra.  He received a special certificate of achievement from the leader of the Budvarka Orchestra.  While on the tour, they also went to Austria and Holland.  Leonard performed with the band for thousands of dances in Nebraska over the years, bringing joy to many people at weddings, anniversaries, Czech festivals,and  polka festivals.In November 2000, Leonard was inducted in the Omaha Sokol Polka Hall of Fame.  Following Ernie's retirement, Leonard joined his brother and nephew in the Leo-Lonnie Orchestra, where he played until his retirement in 2001 at the age of 82.Leonard married his sweetheart, Rose Dostal on June 24, 1947 at Appleton Assumption Catholic Church.  They have lived their entire married life on the farm east of  Brainard, where they raised their two children, Kathy and Leon.  Leonard enjoyed doing things for his children, like building them each a swing set and making a playhouse area.  He faithfully drove them to Holy Trinity School each day.  He also has three grandchildren: Jeffery Piitz, Lindsey(Joshua)Fehlhafer and Chelsea Piitz and fiancé Alex Tietjen.  He has one great-granddaughter: Shelby Fehlhafer.  His grandchildren were a joy in his life and he enjoyed their activities and special events in their lives.  When they were little, one thing grandpa did was decorate the living room on New Year's eve before he went to a dance job, then the kids would come over and have their New Year's eve party with grandma.  Leonard served on the Oak Creek Township Board and helped in the purchase of a new motor grader for the township.He was a faithful member of Holy Trinity Catholic Church.  His faith was a very strong part of his life and he was especially devoted to the rosary and 40 hours Devotions.  He was faithful in attending Mass every Sunday and Holy Day's and attended Mass in Brainard until the week before his hospitalization.  Leonard lived a long and fulfilling life, being active until a couple of days before his final hospitalization.  He is survived by his wife: Rose; Son: Leon (Nancy) Piitz of Brainard; Daughter: Kathy (Morris) Peters of Henderson; Brother: Leo Piitz of Wahoo; 3 grandchildren, 1 great-grandchild and several nieces and nephews. Leonard was preceded in death by his parents, an infant son, 1 brother: Lawrence Piitz, and 1 sister: Lorraine Kozisek.

The family of Leonard Piitz created this Life Tributes page to make it easy to share your memories.

Send flowers to the Piitz family.