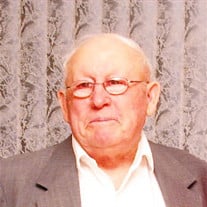 Leo N. Eller, 101, of St. Edward, formerly of David City and Bellwood, died Monday, August 17, 2015 at Clover Lodge Care Center in St. Edward. Memorials: Aquinas High School or St. Peter's Catholic Church Leo Eller was born on December 20, 1913 on the farm near Bellwood to Frank and Mary(Delhamet)Eller. He lived in the area most of his life working as a farmer. He married Helen Shonka on June 12, 1946 at St. Mary's Church, Schuyler, Nebraska. 10 children were born to this union. Helen passed away on July 24, 1981 and he later married Eunice Lindsey on November 24, 1984 at Seward, Nebraska. Leo was a long time member of St. Peter's Catholic Church in Bellwood. He was very involved in the fund raising campaign for the new Aquinas High School in the 1960's, being appointed chairman and bookkeeper of St. Peters for the new project, and he was awarded a medal by Bishop Casey for his distinguished service on the project. He was also on the building committee for the new St. Peter's Church in the early 1970's. He donated the reconciliation room at St. Peter's in memory of his wife, Helen. He was 3rd degree Knight of Columbus in the David City Council and had the distinction of being the oldest active member. Leo enjoyed playing baseball, fishing, dancing, bowling, and traveling. He visited nearly all 50 states during his lifetime. He was also active in many of the Knights of Columbus activities throughout the years. After moving to David City, he became a member of St. Mary's Church in David City, where he actively involved for many years. Leo is survived by his wife, Eunice of Friend, NE, children: Mary Nelson of Eugene, OR, Leo Eller Jr, of Costa Mesa, CA, Mike(Jan)Eller of North Platte, NE, Jean(David)Fisher of Albion, NE, Tom(LouAnne)Eller of David City, NE, Pat Eller of Costa Mesa, CA, Jake(Adela) Eller of Beauford, SC, Carol(Dave)Booth of Coos Bay, OR, and Rita(Jeff)Powell of Salt Lake City, UT. one sister: Irene (Don)Medinger of Bellwood and numerous grandchildren, great-grandchildren and great-great grandchildren. Leo was preceded in death by his parents, his first wife, Helen in 1981, one son, David in 2011, two grandsons, Jeremy and Jason Eller, four brothers, Alfred, William, Shorty and infant brother. two sisters, Viola Schmid and Marcella Medinger.

The family of Leo N Eller created this Life Tributes page to make it easy to share your memories.

Send flowers to the Eller family.