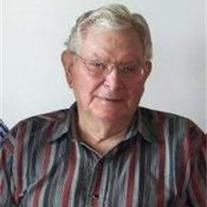 Leander J. Svoboda, 87, of David City, died Monday, September 24, 2012, at David Place in David City. Funeral Mass will be Friday, September 28, 2012 at 10:00am in St. Mary's Catholic Church, David City with Father Bernard Kimminau officiating. Burial will be at St. Mary's Cemetery. Viewing will be Thursday, 2-4pm at Chermok Funeral Home, and from 6-7pm at St. Mary's. Visitation will be followed by a Wake Service and Parish Rosary at 7pm all at the church. Memorials may be directed to Masses, or St. Mary's Catholic Church. Leander J. Svoboda was born on February 25, 1925 in David City, Nebraska to Frank and Christine(Jirovsky) Svoboda. He attended country school through the eighth grade where he excelled in Math. He began helping his Dad with farming and breaking horses to be used for riding and helped with farm work. On March 30, 1948, Leander married Anita Ratkovec at St. Mary's Catholic Church in David City. Eight children were born to this union. They lived on a farm just west of David City for all 64 years of their married life. Together they farmed and raised cattle. Leander was a very hard worker who loved to work on his farm. Some of his favorite things to do were working on race cars, watching his son and grandson race, and watch his grandsons play football. He enjoyed Czech and Country Western music. He especially loved his family and grandchildren very much. Leander was a member of Butler County Feeders & Breeders and St. Mary's Catholic Church. He is survived by his wife, Anita: Daughters, Carol(Mike) Svatora of Newark, OH, Pat(Mike) Egger of Martell, NE, Marilyn(Bruce) Schmit of Bellwood, Sharon(Cork) DeWispelare of David City, and Diane(Tim) Kozisek of David City: Sons, Ken(Beth) Svoboda of St. Paul, NE, Tom(Deb) Svoboda of David City, and Ron Svoboda of York, NE: Sisters, Olga Janak of David City, MaryAnn(Richard) Moravec of David City, and Henrietta(Fred) Benesch of Octavia, NE: 30 grandchildren and 27 great grandchildren. Leander is preceded in death by his parents: one infant daughter, Mary: One brother, Frank Svoboda: One infant brother, Fredrick Svoboda: One sister, Christine Lacina: and one grandson, Tad DeWispelare.

The family of Leander Svoboda created this Life Tributes page to make it easy to share your memories.

Send flowers to the Svoboda family.