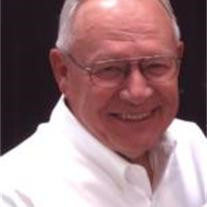 Lawrence "Larry" V. Pokorny of Bellwood, died Saturday, October 9, 2010 at the Columbus Community Hospital. Funeral Mass will be Wednesday, October 13, 2010 at 2:00 pm in St. Peter's Catholic Church, Bellwood with Fr. Jay Buhman officiating. Burial will be in the church cemetery. Viewing will be Tuesday, from 4-7 pm followed by a 7 pm Knights of Columbus Rosary all at the church. Additional viewing will be on Wednesday from 1-2pm at the church. The family has asked that in lieu of flowers memorials be given to the Aquinas Endowment Fund or St. Peter's Parish. Lawrence "Larry" V. Pokorny was born on July 19, 1937 at Brainard, Nebraska to Ivan and Mary(Kozisek)Pokorny. He graduated from David City High School and went on to, graduate from a two year business college in Omaha. He married Jean Birkel on January 14, 1961 at St. Peter's Church in Bellwood. Seven children were born to this union. Larry has farmed in the Bellwood area most of his married life. He was a NCGA member, a 3rd Degree Knight of Columbus, served on the board of directors for First National Bank of Lincoln, David City Branch and was active in the Aquinas Endowment Board from its inception. He was also a member of the Butler County Fair Board, a director of the Bellwood Co-op and Frontier Co-op and active in St. Peter's Church as a lector. Larry's life revolved around his family and his farming. He loved to attend sporting events following his kids and grandkids in all their activities and was an ardent Aquinas supporter. Planting and Harvesting were his favorite times of the year. Larry is survived by his wife, Jean, 5 sons: Kevin(Kim) of LaVista, NE; Brian(Christina) of Leawood, KS; Alan(Renee) of Bennington, NE and Galen(Teresa) of Bellwood,and Roger(Annette) of Bedford, IN, 2 daughters: Diane(Jim Jr)Daro and Julie(Todd)Puck both of Bennington, Nebraska. One brother: Virgil(Pat)Pokorny of Chandler, AZ; one sister: Monica Tvrdy of Valparaiso, NE; 18 Grandchildren, nieces and nephews. He was preceded in death by his parents, one brother: Norbert; one brother-in-law: Edwin Tvrdy; one sister-in-law: Evelyn Birkel; and one nephew: Gary Tvrdy. Larry will be missed by all those who knew him and by all those whose lives he touched.

The family of Lawrence Pokorny created this Life Tributes page to make it easy to share your memories.

Send flowers to the Pokorny family.