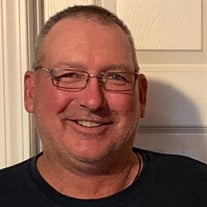 Lawrence "Larry" H. Timoney, 53, of David City died Sunday, March 22, 2020 at Bryan East Medical Center in Lincoln. Due to the restrictions in place from federal & state governments because of the COVID-19 virus, the family will have a private funeral service and burial. There will be no viewing or family visitation at this time. There will be a public memorial Mass and luncheon scheduled at a later date. Per Larry's request, he would prefer memorials to the Ulysses VFD or to Aquinas High School instead of flowers or plants. Thank you. Larry Timoney was born on August 11, 1966 at David City, Nebraska to James "Ted" and Carolyn(Barghahn) Timoney. He attended local country school and Surprise elementary schools and graduated from Rising City High School in 1985. He went on to earn an Associates Degree in Diesel Mechanics from Southeast Community College, Milford. On September 14, 1991, he married Janet Hofpar. Larry and Janet farmed north of Ulysses for many years while raising their three children. He was also a past member of the Ulysses Volunteer Fire Department and St. Mary's Cemetery Board, and longtime member of Immaculate Conception Church, Ulysses. Larry enjoyed spending time in his shop and would drop what he was doing to help anyone in need of help, repairs, or advice on how to fix something. He enjoyed playing cards, attending all his childrens school activities, watching western shows and playing with his big boy "toys", which was any piece of machinery. Larry was a past employee of the Butler County Department of Roads as a maintainer operator. He was currently employed as a machine operator with State Department of Roads, a job which he enjoyed very much. Larry is survived by his wife, Janet, Daughter, Alison Timoney, Sons, Brandon and Jack Timoney all of David City. His parents, Ted and Carolyn Timoney of Ulysses, brother, Kevin(Shawn)Timoney of Ulysses and sister, Monica Crawford of Broken Arrow, OK. He is also survived by aunts, uncles, nieces and nephews and numerous cousins. Larry was preceded in death by his grandparents, father & mother-in-law, John & Rosalyn Hopfar, brother-in-law, Ken Hofpar and niece, Danielle White.

Lawrence "Larry" H. Timoney, 53, of David City died Sunday, March 22, 2020 at Bryan East Medical Center in Lincoln. Due to the restrictions in place from federal & state governments because of the COVID-19 virus, the family will have a private... View Obituary & Service Information

The family of Lawrence "Larry" H. Timoney created this Life Tributes page to make it easy to share your memories.

Send flowers to the Timoney family.