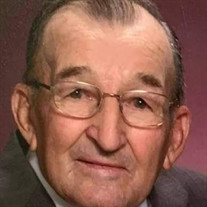 LaVerne William Kozisek, 90, of David City, Nebraska passed away peacefully on Saturday, November 14th at David Place in David City. Memorials can be sent to Aquinas Catholic School in David City. Following the state COVID-19 guidelines and due to increasing COVID positive numbers, we will comply with social distancing seating and limited room capacity at the Rosary Service and Funeral Mass. When church reaches capacity seating, no entry will be allowed. Masks WILL BE required for entry into the church. The Funeral Mass will be live-streamed beginning at 9:55am to our Facebook page: https://www.facebook.com/ChermokFuneralHome The family will not host a funeral lunch following the burial. LaVerne (aka “Fluffy”) was born in Chapman, Nebraska on December 28th, 1929 to William and Rose (Husak) Kozisek. Growing up, he loved helping his Dad on the family farm and this is where he developed his lifelong love of farming. He attended Marietta Catholic School near Bellwood, NE until his father passed away. The family then moved to David City where LaVerne graduated from David City High School in 1948. After high school, LaVerne joined the armed forces and was later honorably discharged. After several odd jobs, he began renting a farm south of David City. On October 2nd, 1965, LaVerne married Norma Jean Matthies of Council Bluffs, Iowa at St. Patrick’s Catholic Church in Council Bluffs. They lovingly raised four sons and eventually purchased their own farm east of David City. His greatest loves in life were his faith, his family, and farming. He was an active member of St. Mary’s Church and served as an Acolyte for many years. He was also involved in the creation of Aquinas High School and was a 4th Degree Knight with the Knights of Columbus. He raised crops and livestock on his farm and later began a 20-plus year career as the Butler County Weed Superintendent. He always enjoyed attending school events for his children and later on, his grandchildren. He loved being a grandpa. LaVerne was always kind and caring and people loved being around him. He was always happy to share whatever he had. When he was younger, he had several family members live at his house. When his Mom was re-married, he welcomed his new family into his own. He also loved being a farming role-model for all the neighborhood children who enjoyed being a part of a family farm. Although he was around livestock his whole life, he had a special way with dogs and they adored him. LaVerne is survived by his devoted wife of 55 years, Norma Jean; sons Patrick (Shannon), James (Cheryl), Christopher (Nancy), and Brian (Mistyn) all of David City; grandchildren Adam Miller and Emily Kozisek, Kinsey, Madison, Caden, and Gretchen Kozisek, Lucas Kozisek, Jacey (Brendan) Napier, Kendra Kozisek, Faith Kozisek, and William Kozisek; one great-grand-daughter, Mia Barry; honorary son Christopher Kroesing of David City; a sister, Maxine Bredahl of Columbus; brothers Gene (Claudia) Kozisek of Garden City, MO, and William (Betty) Kozisek of David City; brother-in-law Fred (Gertie) Matthies of Council Bluffs, IA; step-brother Orville Schmit of Columbus, and many nieces and nephews. He was preceded in death by his parents, two infant sons Mark and Michael, one sister-in-law and brother-in-law Maude (Joe) Ausdemore, brother-in-law Roger Bredahl, stepfather Peter Schmit, step-brothers Eugene and Donald Schmit, step-sisters Dorothy Moyer and Lorene Kallenbach, and two nephews William Kozisek and Stanley Matthies.

The family of LaVerne Kozisek created this Life Tributes page to make it easy to share your memories.

Send flowers to the Kozisek family.