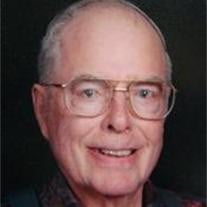 Laverne L. Heins, 88, of Surprise, passed away Monday, February 7, 2011 at the Butler County Health Care Center in David City. Funeral Service will be Friday, February 11, 2011 at 11:00 am in Faith Evangelical Lutheran Church in Rising City with Pastor David Schultz officiating. Burial will be in Faith East Cemetery, rural Rising City. Viewing will be Thursday from 4 - 7 pm at Chermok Funeral Home. Additional viewing will be Friday one hour before services at the church. Memorials may be given to Faith Lutheran Church or Family's Choice. Laverne was born on November 27, 1922 in David City to H.L. and Edna (Egly) Heins. He graduated from David City High School in 1940. At the age of 21, he was drafted and inducted into the United States Army Corps in the ordinance department. He served 33 months in the US Army Air Corps during World War II, in the Pacific Theatre in India and Tinian Island. On September 18, 1955 Laverne married Orva Brockmann at St. Paul Lutheran Church in West Point, Nebraska. To this union were born two sons, Gordon and David. Laverne farmed and lived in the Surprise area for 55 years, serving on the Rising City Co-op board, chairman of the Zion Lutheran Church voters assembly for 9 years and was a member of the Butler County ASCS Board. He was also trustee of the Garrison Cemetery board for many years. He was a past caretaker of the St. Peter's Evangelical Lutheran Cemetery, east of his farm. Laverne was a member of Faith Evangelical Lutheran Church in Rising City. Laverne is survived by his wife Orva of Surprise, sons: Gordon (Linda) Heins of Columbus, David (Marie) Heins of Papillion, brother Loran (Wilma) Heins of rural Rising City, sisters: Betty (Leslie) Strickler of Kenai, AK Avis (John) Kroft of Glade Park, CO, grandson Aaron Heins, sister-in-law Lorene Heins of Rising City and Donna Heins of York. He was preceded in death by his parents, and brothers Don and Russell.

The family of Laverne Heins created this Life Tributes page to make it easy to share your memories.

Send flowers to the Heins family.