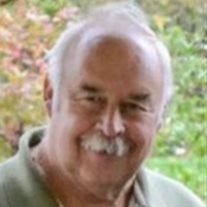 Larry Vanis, 64, of David City, died Monday, February 24, 2014 at Immanuel Health Center in Omaha. Funeral Mass will be 10:00am Friday, Feb. 28 at St. Mary's Catholic Church, David City with Fr. Bernard Kimminau officiating. Burial will be in the church cemetery with military honors by Kregger Legion Post 125/VFW Post 5814 of David City. Viewing will be Thursday, 2-4pm at Chermok Funeral Home and from 6-7 at St. Mary's Church followed by a 7pm Knights of Columbus Rosary. Additional viewing will be Friday from 9-10am at the church. Memorials IN LIEU OF FLOWERS OR PLANTS: Family Wishes Larry Vanis was born on Jan. 6, 1950 in David City to George and Rose(Shavlik)Vanis. After graduating from Aquinas High School in 1968, he attended Community College at Milford, earning an Associates Degree in Diesel Technology. He married Melvene Sedlak on September 12, 1970 at Omaha, Nebraska. Three children were born to this union. They lived in the Omaha area for two years after their marriage and then moved to David City in 1972. Larry owned and operated Bellwood Repair and Wrecker Service. He was retired from the Air National Guard. Larry was a 40 year member of the David City Volunteer Fire Department and an EMT for 39 years. He was also a member of the Knights of ColumbusTihen Council 1717 of David City, Kregger American Legion Post 125 of David City, former member of the David City Jaycees and he also served on St. Mary's Parish Council. He was an avid deer hunter, and enjoyed watching NASCAR, and spending time with family, especially his grandchildren. Larry is survived by his wife Melvene(Sedlak)Vanis, Daughter: Jenni Vanis of Lincoln, Son: Jason(Katie)Vanis of Omaha, two grandchildren: Caleb and Madeline Vanis, mother: Rose Vanis of Bellwood, three sisters: Sue(Lenny)Vidlak of Abie, Betty(Gary)Hruska of Firth and Patty(Todd)Gill of Omaha and several nieces and nephews. Larry was preceded in death by his son Josh in 2004, his father George, and one brother: Bernie Vanis. As Larry desired, he became an organ donor as an opportunity to continue to help other people.

The family of Larry Vanis created this Life Tributes page to make it easy to share your memories.

Send flowers to the Vanis family.