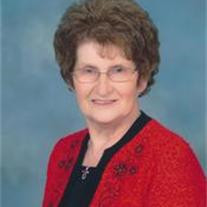 LaVerne Meister, age 76 of Bellwood died Thursday March 15, 2012 at the University of Nebraska Medical Center in Omaha. Mass of Christian Burial will be at 10 AM on Monday March 19, 2012 at St. Peter's Catholic Church in Bellwood with Fr. Jay Buhman as celebrant. Interment will follow at Presentation Cemetery near Bellwood. Visitation will be on Sunday from 5:30 until 7 PM with a 7 PM Rosary all at the church. Memorials have been suggested to Masses or to the family in her name. LaVerne was born October 13, 1935, in Brainard, Nebraska to Method and Agnes (Helman) Swanda. She married Jerome Meister January 12, 1955 at the Holy Trinity Catholic Church in Brainard. She lived in Butler County all of her life. She was a devoted wife, mother and a dedicated teacher. She was a member of St. Peter’s Catholic Church in Bellwood and had served as a PCCW officer. She was a teacher at Bellwood Elementary for 20 years. After retirement she kept busy traveling, quilting and volunteering at Aquinas High School. She enjoyed quilting with the ladies at church and going to quilting classes with friends. Over the years she has made over 50 quilts for her family. Survivors include her sons and daughters-in-law, Jerome Meister Jr. of David City, Ken Meister of Bellwood, Brent and Sheryl Meister of Rising City, Gary and Kim Meister of David City, and Don and Tracy Meister of Norfolk; daughters and sons-in-law, Connie Meister and John Hornbostel of Atchinson, Kansas, Mary Jo and Lee Fozzard of Rising City, Ann and Bryan Starr of Mullen, and Peggy and Steve Brecht of Norway, Iowa; 33 grandchildren and 10 great grandchildren; brother and sister-in-law, Dennis and Jan Swanda of Georgetown, Texas; sisters and brother-in-law, Mary Lou Schott of Sun Lake City, Arizona, and Maxine and Jerry Hain of Wahoo. She was preceded in death by her husband Jerome; her parents, Method and Agnes Swanda; brothers Ken Swanda and Donald Swanda and daughter-in-law, LuAnn (Augustine) Meister.

LaVerne Meister, age 76 of Bellwood died Thursday March 15, 2012 at the University of Nebraska Medical Center in Omaha. Mass of Christian Burial will be at 10 AM on Monday March 19, 2012 at St. Peter's Catholic Church in Bellwood with... View Obituary & Service Information

The family of LaVerne Meister created this Life Tributes page to make it easy to share your memories.

Send flowers to the Meister family.