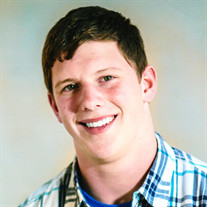 Kenton J. Kobza, 19, of Columbus, formerly of David City, died Tuesday, November 8, 2016, near Hays, Kansas, as a result of injuries from an accident. No viewing or visitation, as the family has chosen cremation. Private family burial at a later date. A funeral lunch will be served immediately following the Memorial Mass at the City Auditorium. IN LIEU OF FLOWERS: Memorials to Aquinas Guardian Angel Fund. Kenton Joseph Kobza was born on April 5, 1997, in Lincoln, Nebraska to Kent and Anita Kobza. He walked into the loving arms of his Lord and Savior, Jesus Christ on November 8th 2016, at the age of 19. Kenton went to Fairbury Elementary and Middle Schools and was a graduate of David City Aquinas Catholic High School. Kenton was a freshman at Fort Hays State University majoring in Exercise Science. He was also a member of the Fort Hays Track and Field team. Kenton was an accomplished athlete during his young life. At Fairbury Middle School he won two junior high discus state championships while in the process setting the state record and ranking first nationally. At Aquinas Catholic High School, Kenton was a three time discus state champion, shot put state champion, two time runner-up and a bronze medalist at the Nebraska state track and field meet. Kenton was a member of multiple high school football and track and field team state championship and runner-up championship teams. Kenton was also a member of the Cornhusker Flyers and Lincoln Jets summer track teams where he competed locally and in national meets. He looked forward to the national meets where he would travel with his family and friends. Kenton was passionate about movies and music often memorizing songs and scenes to recite those close to him. His many past times included weightlifting with his dad and sister, visiting with his mom, fishing with his Grandma and Grandpa, and entertaining his family and friends with his front and back flips he learned while jumping on his trampoline. He taught himself how to play the piano and would fill his family full of laughter with his renditions of his favorite songs. You could always count on the warmest of hugs and sincerest of smiles when you saw Kenton. He was not shy to give you an embrace and tell you a term of endearment. He kept his family close to his heart. He was a young man of exceptional faith in our Lord Jesus Christ and will be greatly missed by everyone that knew him. He was the kind of young man that anyone would be proud to call son, brother, grandson, nephew, cousin, and friend. Survivors: Parents: Kent and Anita Kobza of Columbus, Sister: Janessa Kobza of Columbus, Grandparents: Bob (Jane) Kobza of Columbus and Rodney (Janice)Schrock of Fairbury, Aunts and Uncles: Shawn ( Rod) Bungey of Ft. Mill, SC, Rob (Deb) Kobza of Lincoln, Ryan (Jen) Kobza and Aaron (Jen) Kobza both of Omaha and Julie (Greg) Gilg of Gothenburg. Numerous cousins and other loved ones. Not all scars show, not all wounds heal, not all illness can be seen, not all pain is obvious. Remember this before passing judgement on another. http://www.mentalhealthamerica.net/

Kenton J. Kobza, 19, of Columbus, formerly of David City, died Tuesday, November 8, 2016, near Hays, Kansas, as a result of injuries from an accident. No viewing or visitation, as the family has chosen cremation. Private family burial at a... View Obituary & Service Information

The family of Kenton J. Kobza created this Life Tributes page to make it easy to share your memories.

Send flowers to the Kobza family.