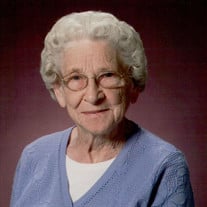 Kathleen "Kate" Martin, widow of Louis, 97, of David City died Friday, June 19, 2020 at her residence surrounded by her loving family. The Funeral Mass and Rosary will be restricted to family and is by invitation only. Public viewing will be on Sunday from 4-6pm at St. Mary's Church with Covid-19 restrictions in place and family will not be present. The Funeral Mass will be recorded and placed on the funeral home's Facebook page as soon as is permissible. www.facebook.com/ChermokFuneralHome/ Memorials to: St. Mary’s Guild American Legion Auxiliary Kregger Unit 125 David City Library Foundation (Children’s Library) Or Donor’s Choice Kathleen (Kate) was born at David City, Nebraska, to Henry and Anna Cecilia (Meysenburg) Lukassen on October 7, 1922. She was baptized at St. Mary’s Catholic Church in David City, attended St. Mary’s Elementary School and graduated from David City High School with the class of 1940. At the time of her death she was one of the longest-standing members of St. Mary’s Parish in David City. She married Louis Martin on February 20, 1946, at St. Mary’s Church, David City. They were the parents of eight children and were married until his death in 1999. Louie and Kate owned the Standard service station in David City from 1955 until 1989 and were devoted to their family and community. They were selected as Pioneer King and Queen during the David City Centennial Celebration in 1973, and in 1996 they received the “Ruthie” Award for outstanding community service during the Ruth Etting Vaudeville Days. Kate was a member of Kregger Unit 125, American Legion Auxiliary, for 70 years. She was also a member of the VFW Auxiliary and St. Mary’s Guild, a Red Cross volunteer, a past member of the David City Housing Authority, and as a 2-time cancer survivor was active in the Cancer Society and Relay for Life. In the early 1950’s, Kate was a member of the Ground Observer Corps that kept watch for Soviet aircraft. She was an employee of the David City Public Schools School Lunch Program for 14 years, where she produced too many cookies to be counted. Kathleen is survived by children Judy (Jack Ekeler), Fremont, Nebraska; Sharon (Mike Miriovsky), Marshalltown, Iowa; William (Trish) Martin, Greensboro, North Carolina; Robert (Sheri) Martin, Davey, NE; Richard (Mallory) Martin, Nashville, TN; Margaret Lehr, Lincoln, NE; Maxine (John Webb), Lawrence, Kansas; Grandchildren Bill (Heather) Ekeler, Mike (Barbie) Ekeler, Susan (Regan Hennis), Dave (Julie) Miriovsky, Hannah Martin, Jared Martin, Lee (Lauren) Martin, Jay (Brandie) Martin, Anne (Teran Walford), Brennen Martin, Shelby (Sean Gallagher), Louis Martin, Jack Lehr, Jamie (Andy Drake), Katie (Matt Philippi), and Brett Lehr; 20 great-grandchildren, sisters Phyllis Lukassen, Doris Wrede and Carol Reznicek; sisters-in-law Jean Hansen, Donna Lightbody and Jackie Mahlin, long-time caregiver Barb O’Connell, many nieces and nephews and a host of relatives and devoted friends. She was preceded in death by immediate family members husband Louis Martin, daughter Patricia Martin, parents Henry and Cecilia Lukassen, and sister Henrietta Kay. Kate was a beacon of love, support and friendship to all her family and friends. Whether you knew her as mom, grandma, “great Martin”, or Kate, her warmth, humor, faith and unconditional love made her a role model for everyone in her life. Forever independent, resilient, humble, happy and loving, Kate’s final days were spent as she spent her life, surrounded by family and loved ones. A small lady but an indomitable and larger-than-life person, Kate’s memory, the lessons we learned from her, and her incredible spirit will live on with all of us who loved her and were lucky to know her.

Kathleen "Kate" Martin, widow of Louis, 97, of David City died Friday, June 19, 2020 at her residence surrounded by her loving family. The Funeral Mass and Rosary will be restricted to family and is by invitation only. Public viewing will... View Obituary & Service Information

The family of Kathleen "Kate" Lukassen Martin created this Life Tributes page to make it easy to share your memories.

Send flowers to the Martin family.