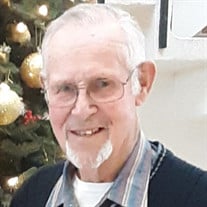 Karl F. Ziethen, 82, of Garrison, passed away from COVID related causes on Sunday, November 15, 2020 at the Butler County Health Care Center in David City. Cremation has taken place. IN LIEU OF FLOWERS, PLANTS OR STATUES: Memorials may be given to the David City Fire Department, Faith Lutheran Church of Rising City or Nebraska Lutheran High School in Waco, Nebraska. Following the state COVID-19 guidelines and due to increasing COVID positive numbers, we will comply with social distancing seating and limited room capacity at the Funeral Service. When church reaches capacity seating, no entry will be allowed. Masks WILL BE required for entry into the church. The service will also be broadcast on radio station 93.9 FM(limited signal coverage) for those who may wish to remain in the comfort of your vehicle in the church parking lot. Karl was born on September 27, 1938 to Rudolf and Kathe (Strack) Ziethen at Hamburg, Germany. He and his brother, Rudolf were baptized on the same day, October 24, 1946 at Oberoctenhausen, Germany. Karl was confirmed on April 2, 1953 by Pastor Meier. After graduating 8th grade, Karl then entered Agricultural School and apprenticed for a number of years on various farms. Karl eventually went on to earn his GED while serving in the army. In January of 1958, Karl came to the United States to work on a farm for Claus and Emma Braasch, near Valley, Nebraska. This couple sponsored Karl and helped him attain his citizenship. In December of 1959, Karl joined the US Army. On June 6, 1960, Karl married Marianne Remmers at Zion Lutheran Church, rural Garrison. The couple were stationed at Newport News, VA until Karl was deployed to South Korea, where he remained until returning to the United States in October 0f 1962. Karl was honorably discharged from the army in December of 1965. Karl went to work at Hughes Brothers until they went on strike and began laying off workers. He then drove a gravel truck until getting a machinist job at Behlen Manufacturing. where he worked until he retired after 32 years. Karl was instrumental in helping organize the Behlen Fire Brigade. Karl was a member of the David City Fire Department for 48 years, and belonged to the Kregger Legion Post 125/VFW Post 5814 of David City. He was also a member of Faith Lutheran Church. He enjoyed traveling, especially to Germany to see his relatives, fishing, working in his workshop, gardening, camping with his grandchildren and great-grandchildren and making them the world's best pancakes. He was a past member of the Garrison Village Board, and was a volunteer camp counselor at Camp Jefferson near Fairbury. Karl is survived by his wife of 60 years, Marianne, two daughters: Margo(Marc)Hlavac of Garrison and Gayle Ziethen of Wichita, KS, sister-in-law: Ursulla Ziethen of Germany, 2 grandchildren: EJ (Beth) Hlavac and Riley Hlavac, 4 Great-grandchildren: Hunter, Emma, Jacob and Maximus Hlavac. He was preceded in death by his parents, one great-granddaughter, Angel Hlavac, brother, Rudy Ziethen, and his sponsor couple, Claus and Emma Braasch.

Karl F. Ziethen, 82, of Garrison, passed away from COVID related causes on Sunday, November 15, 2020 at the Butler County Health Care Center in David City. Cremation has taken place. IN LIEU OF FLOWERS, PLANTS OR STATUES: Memorials may be... View Obituary & Service Information

The family of Karl F. Ziethen created this Life Tributes page to make it easy to share your memories.

Karl F. Ziethen, 82, of Garrison, passed away from COVID related...

Send flowers to the Ziethen family.