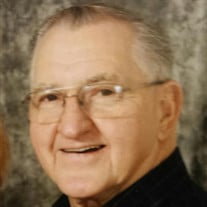 . Joseph J. Yindrick, Sr., 74, died quietly at home March 14, 2015 Joe was born January 22, 1941 to Alois(Louis) and Amelia (Bartunek) Yindrick of David City. He attended grade school near home and graduated from Marietta High School in 1958. He proudly served in the US Army and was stationed at the former Fort Devens in Massachusetts. While on the east coast he met the love of his life, Elizabeth McCarthy. They were married on September 5, 1964 in Marlborough, MA and then moved to their farm east of David City. They proudly celebrated their 50th anniversary in 2014. Joe cherished his faith, his family, farming and his vineyard. Most recently he raised grapes for the Makovicka Winery in Brainard and tended a large garden. He worked for Timpte, Inc. in David City for twenty seven years, retiring at age 70. He was an active and talented musician as a bass player and vocalist from age 15. He performed for nearly sixty years with the Bud Comte Orchestra, the American Czech Brass Band, and numerous local polka bands. The last few years were spent with the Bill Andel Trio and the Knights of Columbus Men’s Choir. His smooth vocal stylings will live on in the hearts of all who heard him. Joe loved conversation and was always quick with a joke or story and many would say he never met a stranger and always wore a happy smile. His zest for life was evident to all who knew and loved him. Joe was an active member of Assumption Appleton parish his entire life and served as an acolyte and on many various committees He was a member of the Fourth Degree Knights of Columbus, American Legion Rejda Post #273 and past member of the Nebraska Winery and Grape Growers Association Joe is survived by his wife, Elizabeth, children: Michele(Sabine)of Elkhorn, Ne, Joseph Jr. (Delaine) of Lincoln, Ne, William(Melissa) of David City, Ne, Nicole(James)Sylvester of David City, and Eric(Jennifer)of Independence, MO, sisters Theresa Kuzelka, Rita Helman, Margaret From and Ann Yindrick, brother in law Edward McCarthy, sister in law Mary Elizabeth McCarthy, grandchildren: Jaydn and Sydni Sylvester, Allyson, Mara, Caleb, Will, Jude, Augustine, Samuel and Alexander Yindrick, step granddaughters Jessica Richards and Jennifer Cook, two step great grandsons Cade Richards and Tractin Cook, and numerous nieces and nephews. He is proceeded in death by his parents and in laws, William and Jeanette McCarthy, sister Marlene Palik, brothers in law William McCarthy, Jerome Palik, Ron Kuzelka, Joseph Helman and Mel From, sister in law Rita McCarthy and nephews Michael McCarthy and John Palik. Memorials: St. Mary's or Aquinas High Schools or Family Wishes

The family of Joseph John Yindrick created this Life Tributes page to make it easy to share your memories.

Send flowers to the Yindrick family.