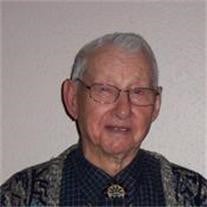 Joseph "Joe" Bohaty, age 96 of David City, died Friday December 9, 2011 at St. Joseph's Villa in David City. Funeral Services will be Wednesday December 14, 2011 at 10:30 AM at Redeemer Lutheran Church in David City with Rev. David Palomaki officiating. Interment will follow at David City Cemetery. Visitation will be on Tuesday from 5 until 7 PM at Chermok Funeral Home in David City and will resume one hour prior to the service at the church. In lieu of flowers, memorials have been suggested to Redeemer Lutheran Church or the David City Volunteer Fire Department. Joe was born on January 16, 1915 to Joseph Sr. and Maggie Bohaty on the family farm in rural David City. His family also consisted of sisters Margaret, Rose, and Mildred, and brothers, Victor and Frank. Joe was married to Georgia Semrad on September 9, 1936. They had two children, Arlo and Jane. He engaged in crop farming in Butler county for over 30 years until his retirement in 1977. He continued to own the farm that has been in the family for 98 years. Joe loved the outdoors and always had a large garden that provided many meals for his family. Watermelons were his specialty. Joe also tended to cattle and chickens. He was always there to help his neighbors by doing bulldozer work with his Caterpillar. He enjoyed polka dancing and card playing with friends and family, and a good joke with his great sense of humor. In his later years he remained active, deer hunting for the first time at the age of 92 and bringing down a deer with his first shot. He was one of the original members of the Redeemer Lutheran Church in David City. He is preceded in death by his parents; his wife, Georgia; his brother, Victor; and his sisters, Margaret Semrad, and Rose Montague. He is survived by his wife, Dorothy (Masek), whom he married on November 17, 1990; brother, Frank of Bruno; sister, Mildred (Gale)Vandenberg of Harlan, Iowa; son, Arlo of Bridgeport, West Virginia; daughter, Jane (Ron) Wickman of Kellogg, Iowa; granddaughter, Jessica (Andy) Schirman, and great grandson, Kainen Schirman, of Granger, Iowa, and many nieces and nephews. He is also survived by his stepchildren, Bob Masek and Kathy Truksa, both of David City; Martin (Pal) Masek of Blair; Connie (Terry) Hickey of Columbus; and Chris (Steve) Bartlett of Hickman; and many step-grandchildren and step-great grandchildren.

The family of Joseph Bohaty created this Life Tributes page to make it easy to share your memories.

Send flowers to the Bohaty family.