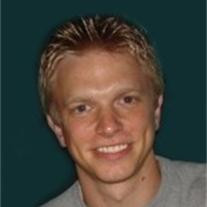 Jonathan "Jon" R. Moravec, 26, of David City, died Thursday, July 9, 2009 at Good Samaritan Hospital in Kearney as a result of an ATV accident on July 4 at Harlan County Reservoir. Memorial Mass is 10:30 am, Monday, July 13, 2009 at Immaculate Conception Church in Ulysses, Nebraska. There will be a private family burial at a later date. The family will greet friends from 5:30 pm - 7 pm Sunday, July 12 at the church, followed by a 7 pm Rosary. There will be no viewing. Jonathan was born on April 4, 1983 in David City to Russ and Diane (Kush) Moravec. He graduated from Aquinas High School in 2001 and from the University of Nebraska at Lincoln in 2005 with a B.A. in Finance. Jonathan was a member of Immaculate Conception Church, a 3rd Degree Knight of Columbus, Delta Upsilon Fraternity at UNL, and the Nebraska Auctioneers Association. He enjoyed the outdoors, hunting, fishing, working auctions with the family business, camping, polka music and dancing, people, working on computers, photography, running, cooking, baking and his work. He touched many lives and made many friends. Jonathan is survived by his parents, Russ and Diane (Kush) Moravec, of David City, significant other, Jeralee Shotkoski of Central City; brothers, Matt Moravec of David City and Trev Moravec of Lincoln; grandparents, Richard & MaryAnn Moravec of David City and Al & Marjorie Kush of Genoa, NE; numerous aunts, uncles and cousins, and close friend and spiritual guide, Fr. Raymond Jansen. He was preceded in death by his great grandparents. In lieu of flowers, the familiy has requested memorials to the Aquinas Endowment Fund.

The family of Jonathan Moravec created this Life Tributes page to make it easy to share your memories.