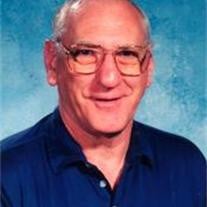 John "Jack" Gilmore, 78, of Corona, California, formerly of David City, died Saturday, October 15, 2011. A Funeral Mass will be Tuesday, October 25, 2011 at 10:00am in St. Marys Church, David City with Fr. Bernard Kimminau, Msgr. Raymond Hain and Msgr. Adrian Herbek concelebrating. Burial will be in St. Mary's Cemetery. Military graveside services by Kregger Legion Post 125/VFW Post 5814 of David City. Rosary will be Tuesday, at 9:30am at church. No viewing or visitation. John James"Jack" Gilmore was born on January 16, 1933 in David City, Nebraska to Dr. William and Mrs. Teckla C.(Kaminski)Gilmore, D.D.S.. He attended David City Public Schools, graduating from David City High School in 1951, of which he was a member of the state winning basketball team of that year. He attended Peru State Teachers College from 1951-1953 and returned in 1955 to finishing school in 1957, graduating with a B.S.in Education and a major in Phyical Education and minors in Industrial Arts and Social Science. In December of 1976, he received his Masters of Arts in Education from Pepperdine University, Malibu, CA. In 1953 he and Dick Wood drove a 1922 Model T Ford, purchased from Olas Lanspa, from David City to visit his sister, Peggy in Arlington, VA. It was the first 4 door car to be purchased in David City. With $60, 5 spare tires, two sleeping bags and two large lunch baskets, made by their mothers, they set off on the journey. They were gone 10 days and covered 3000 miles. The duo used all five spare tires. For their return trip, his sister packed their lunch baskets and the last three days they lived on a bag of ccokies and four candy bars. It was a fun trip shared by two great friends. Jack was in the United States Marine Corp from 1953 until 1955 and was stationed in Japan and Korea. In 1957, he taught Wood Shop and coached at Pender High School. He then moved to the Boston area and worked for Avent Electronics. In 1962, Fr. Raymond Hain asked him to return to David City and teach shop, PE and coach basketball. He was one of the first lay teachers at the new Aquinas High School. He left Aquinas in 1965 and went to teach at Neligh High School. In 1968, he found a home at Corona Junior High School in California, teaching Metal Shop and Wood Shop. He retired from the Corona School System in June of 1988 after 30 years of dedicated service. He loved to travel and especially loved to return home to David City in the summer to visit old friends, and open up the "big family house." Jack is survived by his brother William(Theola Eschliman)Gilmore of Florence, Oregon; sister: Kathleen Powers of Lynn, Massachuettes and 11 nieces and nephews. He was preceded in death by his parents, one niece, Barbara Jane Mitchell in 1949, and older sister: Margaret"Peggy" Mitchell in 2011 and a brothers-in-law: John Powers in 2005 and John Mitchell in 2009. Memorials to the Great Plains Alzheimer's Association or Aquinas Endowment Fund. Family condolences may be sent to his niece: Mrs. Carolyn Brabec, 3160 O Road, David City, Nebraska 68632.

The family of John Gilmore created this Life Tributes page to make it easy to share your memories.

Send flowers to the Gilmore family.