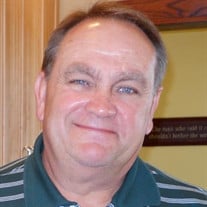 John Bruner, 68, of Brainard passed away Saturday, January 16, 2021 at Bryan Medical Center East Campus in Lincoln. IN LIEU OF FLOWERS, PLANTS AND STATUES: John's family suggests memorials be directed to Family Wishes for later designation. Following John's wishes, he has been cremated. There will be no viewing. Memorial Mass of Christian Burial will be held on Saturday, January 23, at 11 a.m. at Holy Trinity Catholic Church in Brainard. Visitation will be Saturday from 9:30 a.m.- 10:30 a.m. with a parish rosary at 10:30 a.m. Following the state COVID-19 guidelines we will comply with social distancing seating and limited room capacity at the Funeral Service. If the church reaches capacity seating, no entry will be allowed. Masks WILL BE required for entry into the funeral service. The Rosary and Funeral Mass will be recorded and available on our website page 48 hours after the service. Burial will take place in the New Holy Trinity Cemetery. Chermok Funeral Home is handling arrangements for the family. John Charles Bruner was born on June 4, 1952, to Leonard and Marie (Sabata) Bruner in David City, Nebraska. He attended Holy Trinity Catholic School in Brainard and graduated from East Butler High School in 1970. After graduation John attended Milford Trade School and graduated with a degree in Building Construction. He built and repaired numerous homes in the area as well as renovating Holy Trinity Church and overseeing the construction of the Monsignor Klein Center. John was united in marriage to Margaret Sypal on October 3, 1987, at Holy Trinity Catholic Church. They made their home in Brainard with their beloved dog Murphy. John loved to cook, travel to New England and Colorado and was ready to help anyone who needed help. He served as a mentor to many. John followed the guidance of St. Joseph with his carpentry skills and giving back with his talents. John served numerous positions in local and county governments. He was a County Supervisor, Brainard Village Board member, a member of the Brainard Volunteer Fire Department, and EMT. John truly loved the community of Brainard and was instrumental in many Village improvements including the swimming pool, parks, and Evergreen Court. John was a member of the Knights of Columbus and served as a Holy Trinity Church trustee. John is survived by his wife Margaret Bruner, Brainard, NE. his brothers James (Sharon) and Norman (Denise), both of Brainard, NE and his sister-in-law Donna Bruner of Seward, NE. He is also survived by his sisters-in-law Darlene Stanek of Valparaiso, NE, Dee (Joe) Jablonski of Overland Park, KS, Teresa (Dean) Eden of Milford, NE, Annette (Ken) Sousek of Weston, NE and brother-in law Bernard Sypal (Rhonda) of Custer, South Dakota, many nieces and nephews, and many great nieces and nephews. John was preceded in death by his parents, Leonard and Marie Bruner, his brother, Leonard, father and mother-in-law Albin and Agnes Sypal, and brother-in-law Leonard Stanek.

The family of John C. Bruner created this Life Tributes page to make it easy to share your memories.