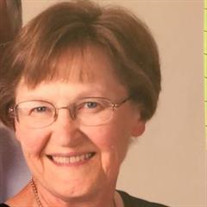 Joan Semin passed away on November 18, 2018 at the age of 77, at her home in David City, Nebraska after a short, but brave battle with pancreatic cancer. Memorials: Masses, St. Mary's Church or Aquinas High School Joan was born on June 26, 1941, to William and Margaret (Thavenet) Oberhauser on the family farm outside of Lindsay, Nebraska. She graduated from Lindsay Holy Family High School in 1959. After High School she moved to Columbus, Nebraska. On July 11, 1964, she married Don Semin at Holy Family Parish in Lindsay, NE. They lived east of Bellwood on a farm for most of their marriage, then moving to David City after retiring. Joan worked several jobs during her life, most recently at Bellwood Ampride, and then as a substitute cook at St. Mary's School. She was active in her Church and community, having been a member of St. Peter's Church in Bellwood for 47 years, and St. Mary's Church in David City for the last 7 years. She was active in PCCW, helped at funeral dinners, volunteered at Bone Creek Museum, as well as the Blood Mobile. Her most cherished job was spending time with her 11 grandchildren. Survivors: husband: Don; 6 children: Steven Semin of Bellwood, Kimberly(Eric) Hamik of Kearney, Eric(Karie) Semin of O'Neill, Beth(John) Schaub of David City, Jean(Ryan) Meister of David City, Kate Bailey of Elkhorn; 11 grandchildren; siblings: Kathy Gaspers of Lindsay, Bob Oberhauser of Omaha, Linda Sorensen of Vermillion, SD, Lois Korth of Humphrey, Dodie Korth of Lindsay, Larry "Buck" Oberhauser of South Dakota, Dale Oberhauser of Genoa, Donna Marik of Exeter; 2 sisters-in-law: Pat Oberhauser of Genoa and Karen Oberhauser of Lincoln. She was preceded in death by her parents; a grandson: James Schaub; two brothers: John "Jack" Oberhauser and Richard "Butch" Oberhauser.

Joan Semin passed away on November 18, 2018 at the age of 77, at her home in David City, Nebraska after a short, but brave battle with pancreatic cancer. Memorials: Masses, St. Mary's Church or Aquinas High School Joan was born on June 26,... View Obituary & Service Information

The family of Joan M. Semin created this Life Tributes page to make it easy to share your memories.

Send flowers to the Semin family.