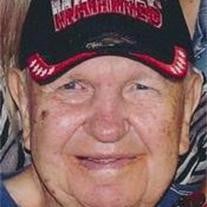 Jerry J. Dubsky, Sr., 91, of David City, passed away on August 22, 2013 at Bryan-West in Lincoln, Nebraska. A Knights of Columbus Rosary will be recited on Saturday at 10:00 am , followed by a 10:30 am Funeral Mass all at St. Mary's Church in David City, Nebraska. Fr. Bernard Kimminau will be officiating. Burial will be at 2:00 pm in the Schuyler Cemetery. A funeral lunch will be served immediately following the Funeral Mass at the Knights of Columbus Hall in David City. Family will greet friends tonight (Friday) from 7-9 pm at Chermok Funeral Home and tomorrow from 9-10 am at the church. Memorials may be given In Care of the Family. Jerry Joseph Dubsky Sr. was born on June 2, 1922 at Schuyler, Nebraska to Joe and Emma (Knapp) Dubsky. He was one of 12 children, 8 girls and 4 boys. He grew up in Schuyler, Nebraska and joined the U.S. Marine Corp at age 17 and served during World War II. He married Janet V. Johnson on January 27, 1946 at Marysville, KS. Jerry worked with his brothers and father at Dubsky and Sons in Schuyler. Later, they lived in Colorado and Wyoming where Jerry worked as a manager for Safeway. They returned to David City, Nebraska in 1974, where they owned and operated Dubsky's Bar. He was a 4th Degree Knights of Columbus, VFW, American Legion and St. Mary's Catholic Church. He loved being with his family and friends. He also enjoyed caring for his flowers and afternoon rides on his scooter with his dog, Archie. Jerry always had a good story or joke to tell. Jerry is survived by JaNae Smith of Aurora, CO; JaNel (Doug) Dumbrill of Gillette, WY; Joe Dubsky of Harrisburg, SD; Jay (Colleen) Dubsky of Schuyler, Jeff Dubsky of Fremont, and JanaLee (Terry) Hale of Minneapolis, MN; one sister: Ruthie Stuchl of David City, 21 grandchildren and 32 great-grandchildren. He was preceded in death by his parents, his wife Janet in 2008, 3 brothers: Art, Neil and Frank and 7 sisters: Marie, Lucille, Margarite, Genevieve, Martha, Ella and Dorothy.

The family of Jerry Dubsky created this Life Tributes page to make it easy to share your memories.

Send flowers to the Dubsky family.