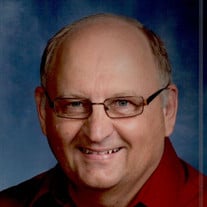 Jerome C. Polacek, 63, of Crete NE died Sunday, March 13, 2022 at the Josie Harper Hospice House, Omaha NE, after a courageous battle with brain cancer. IN LIEU OF FLOWERS, PLANTS or STATUES: Memorials requested for St. Francis Church or Aquinas Endowment Fund. Jerome was born on July 17, 1958 to Jerry and Josephine (Havlovic) Polacek in David City. He attended grade school at Elmwood District 19, a one room school house, and graduated from Bishop Neuman High School, Wahoo NE in 1976. On October 18, 2008, Jerome met his true love and soulmate, Deb Eppenbach. They were married on November 27, 2010 at Sacred Heart Catholic Church in Burwell, NE. Jerome worked for Egr & Son Construction while in high school. He began working at Sack Lumber and Ready Mix in David City in 1977. In 1994 Jerome was promoted to Manager of the Sack Lumber Yard in David City. In 2010, Jerome was promoted to Director of Yard Operations over the 11 Sack Lumber Yards in NE, working out of the Corporate Office located in Crete NE. After 44 years of dedicated service at Sack Lumber Company, Jerome retired in January of 2021. Jerome was a very active member of St. Francis Catholic Church (Center), serving on the Parish Council, Knights of Columbus, and chaired the renovation of the Church. He was also active in the David City Community, serving on the Chamber of Commerce Board, Crime Stoppers, and the David City Parade. After moving to Crete, Jerome continued his serving ways by being Parish Council President at Sacred Heart Church and volunteering with the Crete Chamber at several Community Events. Jerome was active on the Nebraska Lumber Dealers Association Board of Directors where he served as Chairman for 3 years during his tenure. He was recognized and awarded Nebraska Lumber Dealer of the Year in 2019. He also served for several years on the Northwestern Lumber Association Board of Directors, which serves the states of North Dakota, South Dakota, Nebraska, Minnesota, Iowa, and Wisconsin. He lobbied on behalf of the industry in Washington D.C. Jerome loved hunting and fishing. Over the years he traveled to Minnesota, Michigan, Montana, Kansas and South Dakota on fishing trips with family and friends. He bought an acreage near David City where he had space for hunting dogs. Rocket and Sam were a great addition for Jerome to become a more successful pheasant hunter. In 2002 Jerome purchased land near the Calamus Dam where he, his brothers, and nephews built a cabin. This cabin was and continues to be a great getaway from the everyday job and offers an abundance of fishing and hunting. He enjoyed hosting family and friends at the cabin and encouraged them to enjoy the views from the deck at their leisure, a tradition that continues today. The cabin serves as headquarters for Deer Camp during the winter months. Jerome and Deb loved being together. From their cherished monthly car rides to the cabin to hosting friends and family, whether in Crete or at the Calamus, always brought them joy. Being at the cabin in the winter was one of their most treasured times, as it was quiet and beautiful in a different kind of way. Traveling together was always a big part of their lives with trips to Hawaii, Lake Tahoe, Montana, Alaska, Michigan, East Coast, and Arizona, just to name a few. God had a hand in bringing them together, as they met at church in Ord NE, and they will be together heart and soul forever and ever amen! Jerome is survived by his wife: Deb, Stepsons: Troy (Leah) Eppenbach, Justin (Kelli) Eppenbach, Matt (Janet) Eppenbach, Grandchildren: Larissa and Tessa, McKenna, McKenzi, and Maddox, Easton, Graham, and Collins. Siblings: Ken (Judy) Polacek, Dave (Connie) Polacek, Marvin (Deb) Polacek, Mary Ann (Reggie) Briza, Richard (Jane) Polacek, John (Holly) Polacek, Dennis (Darla) Polacek, Tom (Jana) Polacek, Barb (Steve) Byers, Bob (Francine) Polacek, Jim (Elly) Polacek, several nieces and nephews. Jerome was preceded in death by his parents, sisters Kathy Larabee, and Marilyn Hascall, and brother-in-law Gary Hascall.

The family of Jerome C Polacek created this Life Tributes page to make it easy to share your memories.

Send flowers to the Polacek family.