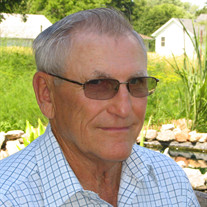 Jerome (Jerry) L. Meister, 81, passed away after a battle with cancer in his home in Brainard, Nebraska on August 11, 2018 IN LIEU OF FLOWERS AND PLANTS: The family request memorials to Holy Trinity Church or Family Wishes. Jerry was born on February 19, 1937 to John and Frieda(Daro) Meister in rural Garrison, Nebraska. He was baptized and confirmed at Saint Francis Church in Center. He attended grade school at Garrison School and graduated from David City High School in 1955. He proudly served in the United States Navy as a yeoman from 1955-1957. In his earlier years, he worked in grocery stores, co-owned a café with his brother George, worked for Hughes Brothers in Seward and the David City Alfalfa Mill. True to his love of the outdoors and making things better he worked for several earth construction companies and then as a union member at M & S Grading Company until retiring in 1997. He also served as a Butler County commissioner for four years. On August 22, 1959, he married Mary Lou Pytlik at Holy Trinity Church in Brainard. They made their home on an acreage in Brainard, Nebraska for the past 58 years. Four children were born to this union: John, Annette Steven, and Mary Joan. Jerry was a person who loved the outdoors spending many years as a heavy equipment operator in Omaha. Traveling with Jerry through Omaha was like going on a guided tour. After retiring, he maintained his acreage and created a large water feature with plants and koi in the pond. He had a huge vegetable garden and he shared the abundant produce with his family and many friends. For years, he raised livestock and poultry on his acreage. He enjoyed hosting garage parties that became well known. His generosity was shown in many quiet ways such as helping others in the community. He enjoyed cooking soup for Senior Center gatherings and sharing his delicious pancakes. His caramel popcorn was legendary which he big-heartedly made in abundance for his friends and family. In the summer, Jerry and Mary Lou would bike around Brainard and enjoy the small-town life, and every morning, he would join the morning coffee group at Clayton’s. During retirement, Jerry and Mary Lou traveled extensively. Jerry was a loving husband and father. His quick smile lit his face whenever his family and friends visited. He was happiest with the sounds of laughter from his family and grandchildren at the many gatherings he hosted. Jerry was also known for his quick wit, kindness and his love of family . Jerry is survived by his wife, Mary Lou, Children: John(Debra) of Hinton, Iowa, Annette(Alan)Snyder of Brainard, Steven Meister of Norfolk and Mary Joan Meister of Ceresco. two brothers: George(Brenda)Meister of Pasadena, TX and Mike(Jenni) Kindler of David City. 5 Grandchildren: Christopher Snyder, Jessica Colburn, Alex Snyder, Virginia Franey and Rachel Meister Kehrberg. 4 Great-grandchildren: Ashlynn Colburn, Destiny, Charity, and Brian Maguire. He was preceded in death by his parents, John and Freida Meister Kindler, Floyd Kindler, brother: Leo Meister and sister: Dorothy Wilson.

Jerome (Jerry) L. Meister, 81, passed away after a battle with cancer in his home in Brainard, Nebraska on August 11, 2018 IN LIEU OF FLOWERS AND PLANTS: The family request memorials to Holy Trinity Church or Family Wishes. Jerry was born... View Obituary & Service Information

The family of Jerome "Jerry" Meister created this Life Tributes page to make it easy to share your memories.

Send flowers to the Meister family.