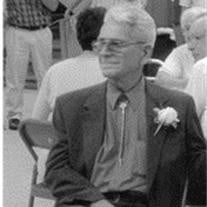 Jerome J. Palik, 78, of David City died Friday, November 20, 2009 at his residence in David City. Funeral Mass will be Tuesday, November 24, 2009 at 10:00am in St. Mary's Church, David City with Fr. Bernard Kimminau officiating. Burial will be in the Appleton Catholic Cemetery, rural David City. Viewing will be Monday, 2-5pm at Chermok Funeral Home and after 6pm at the church followed by a 7pm parish wake/rosary. Refreshements will be served in the school hall immediately following the wake/rosary service. Memorials may be given in care of the family. Jerome J. Palik was born on December 15, 1930 on the farm near Garrison to Joseph and Marie(Voboril)Palik. He proudly served his country during the Korean War era in the Army. He married Marlene Yindrick on May 18, 1954 at Assumption Catholic Church, Appleton, Nebraska. To this union, 11 children were born. Jerome lived in the Butler County area all of his life and engaged in farming. He loved the outdoors and spent much of his life working the land and using his talents as a carpenter. He was a lifetime member of the VFW Post 5814. He is survived by his wife: Marlene, his sons and daughters-in-law: Joe and Mary Beth Palik of Omaha; Jim and Jodi Palik of Seward;Jerry and Delyce Palik and Mike and Robin Palik both of Cabot, AR; and Danny Palik of Omaha; his daughters and sons-in-law: Julie and Chuck Messersmith of Columbus; Louise and Joel Kroft of Seward; Annette and Bob Griffiths of Columbus; Candi Palik and Amy Palik both of David City; one brother: Vic and Carol Palik of David City and two sisters: Edith and Mark Alt and Lucille Alt both of Shelby; He is also survived by his brother-in-law: Joe and Betty Yindrick of David City; his sisters-in-law: Theresa and Ron Kuzelka of Grand Island; Rita and Joe Helman of Brainard, and Margie and Mel From of Omaha; 18 Grandchildren and 5 Great-grandchildren. He was preceded in death by his parents; one son: John M. Palik, one brother: Dennis Palik; two nephews: Gary Alt and Brian J. Palik;and his parents-in-law: Louis and Amelia Yindrick.

The family of Jerome J. Palik created this Life Tributes page to make it easy to share your memories.