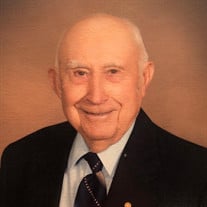 James E. Karpisek, 96, of David City died Sunday, June 6, 2021 at St. Joseph's Villa in David City. In lieu of flowers, plants, and statues memorials can be directed towards the Dwight American Legion Post #110 or family wishes for later designation. The rosary and Mass for James will be live streamed to our Facebook page starting 5 minutes prior to the rosary. Click here to access the stream www.facebook.com/ChermokFuneralHome James Elias Karpisek was born on September 19, 1924, on the family farm north of Ulysses to Frank Sr. and Rosalie (Kavan) Karpisek, the youngest of 7 children. He attended Greenleaf District 52 School through 8th grade and graduated from Surprise High School in 1943. He volunteered and served in the United States Navy during WWII from April, 1944 to May, 1946. Following his honorable discharge, he worked at the Mead Ordinance Plant before returning to the family farm and began farming with his brother. On May 18, 1948, he was united in marriage to Alice Marie Toman in Topeka, KS. Four children were born to this union. They were members of Immaculate Conception Catholic Church in Ulysses for many years. Jim married Shirley Rechtenbach on July 31, 1983, at Blessed Sacrament Catholic Church in Lincoln, NE. They retired in 1990 and moved to David City, NE. They enjoyed RV camping, traveling, casino gambling, garage sales, and playing board and card games with friends. Jim was an excellent dancer and enjoyed polka and country/western music. He enjoyed sports and hunting, and was especially interested in vintage airplanes. He was a member of St Mary’s Catholic Church in David City and the Dwight American Legion where he proudly received a Quilt of Valor. Jim is survived by his sons; James Jr. (Janice), and David (Phyllis), 7 grandchildren, 10 great-grandchildren, stepdaughter Lynn Bartlett; stepson Richard (Rita) Rechtenbach, 4 step-grandchildren, 5 step-great-grandchildren, one step-great-great-grandchild, and 5 nieces and a nephew. Jim is preceded in death by his wife Alice, daughter Loretta, and son Timothy in 1977, wife Shirley in 2003; step-son-in-law Bill Bartlett; his parents, 4 brothers, and 2 sisters.

The family of James E. Karpisek created this Life Tributes page to make it easy to share your memories.

Send flowers to the Karpisek family.