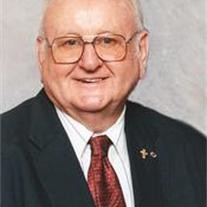 James J. Chermok Jr, 80, of Lincoln, died Saturday, December 1, 2012 at St. Elizabeth's Hospital in Lincoln. Funeral Mass will be Wednesday, December 5, 2012 at 11:00am, St. John's Catholic Church in Lincoln. Burial will be in Lincoln Memorial Park at 2pm. Visitation will be Tuesday, from 2-9pm at Butherus Maser-Love Funeral Home in Lincoln. A Rosary will begin at 6:30pm at the funeral home. Visitation will continue Wednesday from 10-11am at the church. Family has asked IN LIEU OF FLOWERS, that memorials be given for Masses or In Care of the Family. James J. Chermok was born on August 24, 1932 on the farm near Garrison, NE to James and Libby(Bushek)Chermok. He attended District 16 grade school and went on to graduate from Ulysses High School in 1949. He worked at Hughes Brothers in Seward before entering the US Marine Corp in 1951. He served as a Master Sargent in the MP’s and his venues included Korea, Japan and the United States. He was honorably discharged in 1955 and began his career at Goodyear working in the hose department and eventually moving up to management. He retired in 1993. He married Irene Hladky on Sept. 29, 1956 at St. Patrick’s Catholic Church, Utica, NE. One child was born to this union. Jim was a member of the Utica Legion Post 49, St. John’s Catholic Church, and Knights of Columbus Msgr. Helmann Council 11280. In previous years, he was in the Goodyear Top Ten Club, head church usher, taught Hunter Safety Courses and played AAA Softball. Jim was an avid hunter, fisherman and jack of all trades, doing everything from rebuilding cars to building houses. His favorite times were his fishing trips with good friends and family to Lake McConaughy, and Calamus Reservoir, hosting annual summer fish frys and being the family videographer at most weddings and anniversaries. He also traveled to the Czech Republic, searching out his family heritage. He is survived by his wife of 56 years, Irene, one son: Mark(Miriam)Chermok of David City, two grandchildren: Trina Chermok of David City and Zech Chermok of Lincoln and one great-granddaughter: Avery. One brother: Don(Berni) of Lincoln, several nieces and nephews. He was preceded in death by his parents. Arrangements by Butherus-Maser-Love Funeral Home of Lincoln.

The family of James Chermok created this Life Tributes page to make it easy to share your memories.

Send flowers to the Chermok family.