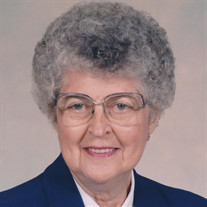 Irene C. Slonecker, 97, of David City died Tuesday, September 26, 2017 at david place in David City. Memorials: Family Choice Irene was born on July 22, 1920 at Staplehurst, Nebraska to Ernest and Emma (Ehlers) Nicolaus. She married Virgil Slonecker on June 13, 1942 at Seward, Nebraska. Three children were born to this marriage. After their marriage, they lived in the Seward area until moving to David City in 1956. where she remained until her death. Irene was a dedicated homemaker and mother, and later worked as a Quality Control Inspector at Dales Electronics, where she worked for 17 years. She was a member of Redeemer Lutheran Church, Redeemer Lutheran Ladies Guild, V.F.W. Auxiliary Post #5814, and DAV in Columbus. In her later years, she enjoyed bingo day with the church guild at David Place and spending time with her family. Irene is survived by her son, Richard and Ann of Silver Creek, NE, 3 Grandchildren: Joshua, Travis and Colby Slonecker, 8 Great-grandchildren: Trista, Breanna, Sophia, Tayja, Reese, Taylor, Tessa and Carter Slonecker. She was preceded in death by her parents, husband, Virgil in 1995, Daughter: Carol Kelch in 2010 and Son: Keith Slonecker in 2012, two sisters and two brothers.

The family of Irene C Slonecker created this Life Tributes page to make it easy to share your memories.

Send flowers to the Slonecker family.