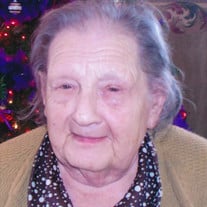 Irene M. Sanley, 96, of David City died Friday, November 11, 2016 at david place in David City. Memorials: Family Wishes A funeral lunch will be served at Winfields immediately following the burial service. Irene was born on December 27, 1919 at Surprise, Nebraska to Edward and Mollie(Zima)Janak. She attended School District 47. She married Lewis H. Sanley, Jr. on September 19, 1939 at Aurora, Nebraska. Two children were born to this union. They made their home on a farm near Surprise. They moved to Ulysses when Lewis retired in 1971. Irene was a kind and loving wife, mother, and grandmother. She was an amazing cook, loved flowers and gardening. She was a very giving person, especially with her jelly making and homemade dill pickles, which were enjoyed by many. Irene is survived by her daughter, LuJane(Ron)Skiff of Norfolk, Daughter-in-law: Elaine Sanley of Lincoln, 4 Grandsons: Jason(Antje)Skiff, Matthew(Angie)Skiff, Brian Sanley and Jeff Sanley, 6 Great-grandchildren: Renay and Kayne Sanley, MaKenna, Cameryn, Cohen and Callam Skiff and numerous nieces and nephews. She was preceded in death by her parents, her husband, Lewis in 1976, her son, Glen Sanley, 6 brothers, two infant sisters, three sisters-in-law and two brothers-in-law.

The family of Irene M Sanley created this Life Tributes page to make it easy to share your memories.

Send flowers to the Sanley family.