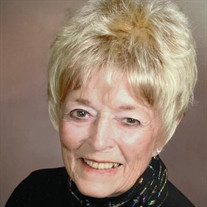 Irene J. Chermok, 82, widow of Jim, died Sunday, October 4, 2020 at her residence after a valiant battle with breast cancer. Memorials: In Care of the Family A Private Family Funeral Mass will be held on Friday with burial to follow at Lincoln Memorial Park Cemetery in Lincoln. All are invited for the burial service. Meet at Gate #2 by 12:45pm on Friday, October 9, 2020. There will not be a lunch or gathering following the burial service. Irene was born on October 29, 1937 on the farm near Gresham, Nebraska to Emanuel and Josephine (Vrbka) Hladky. She attended local country school until her parents moved to the Utica area where she graduated from Utica High School in 1955. On September 29, 1956, she married James Chermok Jr at St. Patrick’s Catholic Church in Utica and one child was born to this union. Irene was a stay at home wife and mom until her later years when she began working as a lunch hostess for area funeral homes. She also did her civic duty by working on the election commission, faithfully working the long hours each election day. Irene loved music, and in 1967, she was asked to become the local organist at St. John’s Church, where she maintained that position until the time of her death. She officially retired as organist with the adult choir in 2006, but continued to play for weddings, funerals and the 7:30am Sunday Mass. Irene attended daily Mass and was involved in monthly rosary groups and loved to travel. She enjoyed spending time with her family and friends and was a big Elvis and Husker fan. In 1985, she joined the Goodyear Gym, where she would go several times a week to both socialize and exercise, and was a member until they closed in 2019. Irene is survived by her son: Mark (Miriam) Chermok of David City, Ne; two grandchildren: Trina Chermok and fiance, Maverick Williams of David City and Zech (Nicole) Chermok of Lincoln. One great-granddaughter: Avery Chermok of David City. Four brothers: Ray (Virginia) Hladky of Kansas City, MO, Ben Hladky of Los Cruces, NM, John (Rosie) Hladky of Stuart, Ne and Eugene (Joan) Hladky of Utica, NE, two sisters, Mary Lou Codr of David City, Ne, and Janice Perkins of Broomfield, CO. Several nieces and nephews, and two wonderful neighbors, Joyce Newnum and Julia Jording, who helped to care for her until her death. She was preceded in death by her parents and her husband, Jim in 2012. Two brothers-in-law: Don Codr and Jim Perkins

Irene J. Chermok, 82, widow of Jim, died Sunday, October 4, 2020 at her residence after a valiant battle with breast cancer. Memorials: In Care of the Family A Private Family Funeral Mass will be held on Friday with burial to follow at Lincoln... View Obituary & Service Information

The family of Irene J Chermok created this Life Tributes page to make it easy to share your memories.

Send flowers to the Chermok family.