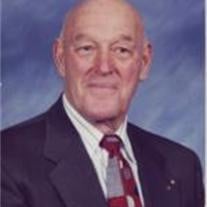 Herman F. Hansen, 82, of David City, passed away Thursday, June 10, 2010 at BryanLGH East Hospital in Lincoln. Funeral Services will be Tuesday, June 15, 2010 at 10:00am in St. Luke's United Methodist Church, David City with Rev. Mark Schutt officiating. Burial will be in the David City Cemetery. Viewing will be Monday, from 4-7pm at Chermok Funeral Home and on Tuesday, one hour before services at the church. The family has asked in LIEU OF FLOWERS that memorials be given to: The Masonic Eastern Star Home for Children, David City High School Alumni Scholarship Fund or Donor's Choice. Herman Frank Hansen was born on February 1, 1928 to Frank Herman and Antonette Faytinger Hansen in David City. He spent his entire lifetime in David City with the exception of the two years attending the University of Nebraska, where he was a member of the marching band. He died at Bryan/LGH Hospital in Lincoln on June 10, 2010 after a brief illness. Herman attended school in David City and graduated from David City High School in 1945. He just recently enjoyed the 65th class reunion with his classmates. On September 24, 1950 he was united in marriage to L.Jean Martin at St. Luke's United Methodist Church in David City. They were the parents of three children: Kelly Hansen Oestmann, Frank Hansen and Beth Marie Hansen. Herman was a member of St. Luke's United Methodist Church where he was a member of the bass section of the choir for more than 62 years and sang with them the last time on May 23rd of this year. In the late 1940's and early 50's, he directed the choir which was made up mainly of high school students. When the student population of the church diminished, he and other adults composed the membership of the choir. Herman joined the Masons on his 21st birthday and was a 61 year member of Fidelity Lodge No.51 of Ancient Free and Accepted Masons. He also held membership in Composite Lodge No. 81 of Rising City and Osceola Lodge No. 65 of Osceola. He thoroughly enjoyed assisting with the initiation ceremonies where he gave various lectures and especially enjoyed the camaraderie of the Masonic Brothers. Through the years, he served as Master, Secretary, and Treasurer. Herman was a past Associate Guardian of Job's Daughters Bethel No. 51 of the International Order of Job's Daughters. In 2000, he was made an honorary member of that organization. He was raised in the Meat Market owned and operated by his father and uncle. His early responsibilites were sprouting potatoes, where he earned a nickel for each 100lb bag sprouted. With this money, he could go next door and purchase a huge Baby Ruth candy bar. Later he was able to make deliveries, wait on customers and assist with clean up. Herman took early retirement after workintg for 35 years with the Lincoln Telephone and Telegraph Company. He then spent about a year working at the Hometown IGA and several years doing small engine repair at the Gambles Store. For the past 21 years, he has been caretaker of the Garden Manor Apartments where he took great pride in the beautiful lawn surrounding the buildings and was always up early to remove the snow. Herman was an avid deer hunter with both bow and arrow and rifle and has many trophies mounted in their cabin. Spending time with family at the cabin on the Platte River was one of his favorite past times. He built the cabin in the mid 60's from telephone cross arms which the phone company was discarding when their toll lines were placed underground. For the past several years, he enjoyed a week of fishing in Canada with his son Frank and son-in-law Ralph. Herman is survived by Jean, his wife of 59 1/2 years, daughter Kelly and husband Ralph Oestmann of Bristow, VA, son Frank and wife Judy of David City, and Daughter BethMarie and fiance Tom Rost of Minneapolis, MN; granddaughters: Toni Oestmann of Arlington, VA; Didi Oestmann of Bristow, VA; and Lesley and Casey Hansen of Lincoln. Also surviving are sisters-in-law and brother-in-law Elaine Tonniges of Columbus, Donna and Jim Lightbody of Lincoln, Maxine Riddle of Charlottesville, VA, Jackie Mahlin and Kate Martin of David City and nieces and nephews. He was predeced in death by his parents and one sister, Marie Hansen and one half-brother Donald Hansen.

The family of Herman Hansen created this Life Tributes page to make it easy to share your memories.

Send flowers to the Hansen family.