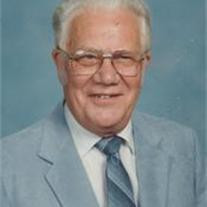 Herbert Morlok, 94, of David City passed away on November 26, 2012 at David Place in David City. Funeral Services will be Saturday, December 1, 2012 at 10:30am at Redeemer Lutheran Church in David City with Reverend David Palomaki officiating. Interment will follow at David City Cemetery. Viewing and visitation will be Friday from 4 until 7 at Chermok Funeral Home. Viewing will resume one hour before the service on Saturday. IN LIEU OF FLOWERS: Memorial have been suggested to Redeemer Lutheran Church. Herbert A. Morlok was born on July 1, 1918 on the farm north of Columbus to Otto and Ida(Wurdeman)Morlok. He graduated from Columbus High School. Herb worked various jobs after high school and entered the US Army where he served as a cook during WWII in Panama. After his discharge, he worked in the Coast to Coast Hardware store, which he eventually owned and operated until selling in 1983. Herb married Lorene (Joseph) Staub on June 1, 1956 at Immanuel Lutheran Church in Columbus. After his retirement from hardware , he went to work with Harlan Hendricks as contractors for Timpte Mfg sharpening drill bits. He retired from that job in the late 1990's. Herb was a woodworking artist, creating many beautiful works of art with his hands and woodworking tools. He also enjoyed fishing and was involved with church and civic activities, including president of the David City Chamber, church elder and officer, and superintendent of Sunday School. He was a member of Redeemer Lutheran Church and the Kregger Legion Post 125 and VFW Post 5814. He is survived by his wife: Lorene, son: Scott(Arlys)Staub of Woodburn, IN; daughter: Kathy(Greg)Connery of Wasilla, Alaska, brother: Elmer(Francine)Morlok of Beaverton, OR. 5 Grandchildren: Michael(Clare)Staub, Aaron(Kelli)Staub, Jeremy(Becky)Staub, Kara(Zach)Howell and Morgan Connery. 5 Great-grandchildren. He was preceded in death by his parents, one brother: Adolph.

Herbert Morlok, 94, of David City passed away on November 26, 2012 at David Place in David City. Funeral Services will be Saturday, December 1, 2012 at 10:30am at Redeemer Lutheran Church in David City with Reverend David Palomaki officiating.... View Obituary & Service Information

The family of Herbert Morlok created this Life Tributes page to make it easy to share your memories.

Send flowers to the Morlok family.