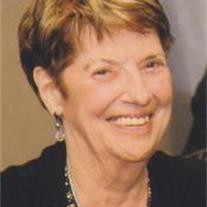 Helena M. "Sharky" Hendricks, 89, of David City, passed away on March 28, 2013 at Bryan West in Lincoln. Memorial Service will be Tuesday, April 2, 2013 at 2:00 pm at St. Luke's United Methodist Church with Reverend Mark Schutt officiating. Burial will be Wednesday, April 3, 2013 at 12:00 pm at Prairie Home Cemetery in Holdrege, NE. Memorials have been suggested to St. Luke's United Methodist Church, Hruska Public Library and to the Senior Center. Helena was born July 7, 1923 to Sam and Helena (Sauer) Schrock in Holdrege, Nebraska. She grew up on a ranch and attended a country school until high school. Helena graduated from Holdrege High School and continued her education at Kearney College where she was a member of the orchestra. She took a break from school for a few years during WWII and went to work in Washington D.C. and Lincoln. Helena then graduated from the University of Nebraska with a Bachelors Degree in Business. After college she worked in business in Holdrege and David City ending with 25 years at U.S. Bank. She was united in marriage to Harlan Hendricks on June 18, 1949 in Holdrege, NE. Helena was a long time member of St. Luke's United Methodist Church. She loved to travel with Harlan and her family. Helena was involved in PEO, Northside Club and the American Legion Auxillary. She served on the St. Joseph's Villa Board was a City Ambassador and volunteered at Hruska Public Library and Bone Creek Museum. Helena enjoyed the Senior Center, church activities, playing bridge, horses, and her friends and family. Helena is survived by daughters: Jacqueline J. (Richard) Dummar of Omaha, NE and Kristy M. Hendricks of Rochester, VT; son: Wayne (Sheila Burke) Hendricks of St. Paul, MN; grandchildren: Nicole C. (Tommy) Thompson and their son Traynor, Allycia M. (Nick) Combs, and Sophie, Max and Ruby Hendricks. She is preceded in death by her parents; husband Harlan (2007); sisters: Violet, Ruth and Patty; and brothers: Truman and Sam.

The family of Helena "Sharky" Hendricks created this Life Tributes page to make it easy to share your memories.