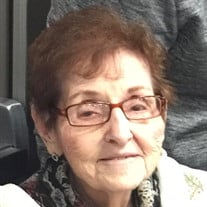 Helen Ptacek, 86, of David City died Tuesday, May 29, 2018 at St. Joseph's Villa in David City. IN LIEU OF PLANTS AND FLOWERS: Memorials to: Masses or Aquinas Guardian Angel Fund. A funeral lunch at the City Auditorium will be held immediately after the Funeral Mass. Burial will be at 1:30pm at St. Anthony's Cemetery, rural Bruno. Helen was born on April 27, 1932 to John and Josephine (Prochaska) Belovic. She attended David City High School, graduating in 1949. She went on for Normal Training, and taught in country schools for a year. On June 12, 1951, she married John Ptacek at Ss. Peter and Paul Church in Abie, Five children were born to this union. Helen stayed home to raise her family and eventually went to work as a nurse's aid for over 10 years at the Butler County Hospital. She transferred into the kitchen as a cook and worked for several more years. After she left the hospital, she worked as a cook at Aquinas High School, where she worked until she retired. Helen was a devoted mother, grandmother and great-grandmother. She enjoyed spending time with her family, especially her grandchildren and great-grandchildren. She loved attending their events and school activities. Helen was a past member of St. Anthony's Church in Bruno as well as the Altar Society. She was a current member of St. Mary's Church in David City where she had a weekly Holy Hour and was a member of the PCCW. She loved to work her search-a-word and crossword puzzles as well as computer solitaire, reading, enjoyed classic movies on TV and she also attended the Women's Thursday Coffee Group. Helen is survived by her children: Steven (Diane) Ptacek of Omaha, Mark (Nadia Tymkowych) Ptacek of Spearfish, SD, Patrick (Kelly) Ptacek of Omaha, and Ann (Shane) Heermann of David City, Daughter-in-law; Sue (David) Ward of Henderson, NV. 12 Grandchildren and 13 Great-grandchildren with two more expected by years end. She was preceded in death by her parents, her husband John in 2015 and son, Paul in 1999.

Helen Ptacek, 86, of David City died Tuesday, May 29, 2018 at St. Joseph's Villa in David City. IN LIEU OF PLANTS AND FLOWERS: Memorials to: Masses or Aquinas Guardian Angel Fund. A funeral lunch at the City Auditorium will be held immediately... View Obituary & Service Information

The family of Helen Ptacek created this Life Tributes page to make it easy to share your memories.

Send flowers to the Ptacek family.