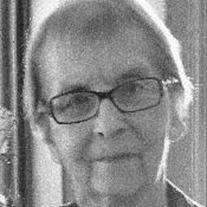 Helen Novak, 86, of David City, died Wednesday, August 3, 2011 at David Place. Funeral Services will be Saturday, August 6, 2011 at 10:30am in St. Luke's United Methodist Church, David City with Pastor Mark Schutt officiating. Burial will be in the David City Cemetery. Lunch will follow immediately after the burial in the church basement. Viewing will be Friday, from 4-7pm at Chermok Funeral Home and Saturday, from 9:30 to 10:30am at the church. Memorials to the David City VFD or the Butler County Senior Center. Helen Konrad was born on September 4, 1924 to Frank and Anna(Sykora)Konrad on the farm near Rising City. She met and married Martin Novak on April 22, 1947 in Columbus, Nebraska. Three children were born to this union. During her early married years, she was a housewife and mother, eventually entering the work force at the cafe in the Hotel Perkins. She the went to work with Spencer Foods as a food processor. She also worked at Dales Electronics in Columbus as a production worker and as a store clerk for the Coast to Coast stores in Schuyler and David City. Helen was a member of St. Luke's United Methodist Church, she also loved to garden, growing a large flower and vegatable garden every year. She liked Czech music, and could even play "Turkey in the Straw" on the accordion. She was an excellent baker, seamstress, embroiderer, making many pillows for family members. She enjoyed taking walks and being with family, especially her grandchildren and great-grandchildren. Helen is survived by her sons: Larry(Terry)Novak of David City; Richard(Diana)Novak of Gretna; Daughter: Patsy(Milton)Kobza of David City; 10 Grandchildren; 17 Great-grandchildren and one great-great grandson. She was preceded in death by her parents, her husband, Martin in 2008, three sisters: Rosie Vavra, Tillie Konrad and Lillian Konrad and one great-grandson Adam Thomas Kobza.

The family of Helen Novak created this Life Tributes page to make it easy to share your memories.

Send flowers to the Novak family.