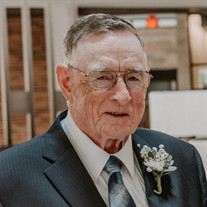 Harlen R. Lyons, 86, of David City, Nebraska died Wednesday, October 7, 2020 at his home in David City. Memorials can be directed towards family wishes for later designation. The rosary and mass will be live-streamed beginning at 9:25 to our Facebook page: https://www.facebook.com/ChermokFuneralHome/ With COVID precautions in place, ALL attending the rosary and the Mass will be required to wear masks. Interment will be in the St. Mary’s Cemetery. Harlen Raymond Lyons was born on January 24, 1934 in Clearwater, Nebraska to David and Adele (Brockmoller) Lyons. Harlen attended school in Clearwater until the family moved to Herman, Nebraska in 1941, the family then moved to David City in 1947 where he graduated from Marietta High School in 1952. After high school, Harlen enlisted in the United States Army and was stationed in Germany during the Korean War. While deployed, he worked as a trained mechanic. Upon his honorable discharge, Harlen married Patricia Rerucha on June 13, 1959 at St. Mary’s Catholic Church in David City after knowing her since high school. Four children were born to this union. To everyone throughout David City and the surrounding area, Harlen was known as Mr. John Deere. Starting as an 8th grader in 1948 he began working at the local John Deere dealership Coufal & Birkel. Although the name changed through the years from R.L.D Inc., Seward Implement, Interstate Equipment, Plains Power and Equipment, Plains Equipment Group, and recently AKRS Equipment, one thing remained the same-Harlen was there to help, right up until his passing after 72 years. Harlen was so familiar with John Deere equipment, over the years he consulted with the engineers who designed the new John Deere equipment. Harlen was as close to an engineer as one could be. He was a jack of all trades that could fix anything-from a Waterloo Boy to the latest John Deere technology. When Harlen wasn’t busy fixing a tractor or combine, he would be with his family, either attending church or cheering on his boys (and later their children) at their sporting events. Harlen and Pat loved driving to their grandchildren’s events and loved their cross-country road trips. On top of his full-time job, in 1978, Harlen began farming a small farm, in which he took great pride, south of David City. He was a very devoted man to his church and his community. Harlen was an active member of St. Mary’s Church, serving as a commentator and on the cemetery board, and was a faithful member of the Knights of Columbus. Harlen sat on the city council which eventually led to being Mayor of David City. Harlen was also very active in the Aquinas Booster Club and was a longtime member of the Jaycee’s. Whether talking about his faith, family, his job Harlen lived by the simple quote from the original Mr. John Deere- “I will never put my name on a product that doesn’t have in it the best that is in me”. Harlen is survived by his wife of 61 years, Patricia; sons: Dan (Lisa) Lyons of Norfolk, Chad (Kim) Lyons of McCook, and Cary (Stacia) Lyons of Morton, Illinois; grandchildren: Trent (Lisa) Lyons and their children Sophia and Ava, Kali (Jake) Curl and their children Landon and Kinlee, Jacob Lyons, Luke (Jordan) Lyons, Matthew Lyons, Vincent Lyons, Bryce Lyons, and Colton Lyons; Sister-in-law: Dolores Lyons of Lincoln, brothers: Robert Lyons of Hastings and Ron (Monica) of David City, Brother-in-law and Sister-in-law: Gerald and Theresa Rerucha of Kalamazoo, MI and sister-in-law: Janice Otoupal of York. He is preceded in death by his parents, infant daughter Mary Ann, one brother, LeRoy Lyons, and brother-in-law, Gary Otoupal of McCool Junction.

Harlen R. Lyons, 86, of David City, Nebraska died Wednesday, October 7, 2020 at his home in David City. Memorials can be directed towards family wishes for later designation. The rosary and mass will be live-streamed beginning at 9:25 to... View Obituary & Service Information

The family of Harlen R. Lyons created this Life Tributes page to make it easy to share your memories.

Send flowers to the Lyons family.