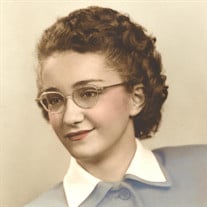 Geraldine T. Sladky, 84, of Lincoln, died Tuesday, September 20, 2016 at Lancaster Rehabilitation Center in Lincoln, Geraldine was born on May 6, 1932 in Wahoo, NE to Hubert and Philomena(Kantor) Meduna. She was an only child. Gerry was baptized, received her First Holy Communion, Confirmation, and was married at St. Vitus Church in Touhy. She lived and grew up on the farm with her parents, by Touhy, with no running water, or inside bathroom facilities. She was united in marriage to Math J. Sladky on November 20, 1951 at St. Vitus Catholic Church in Touhy, Nebraska. Gerry went to college to be a teacher, but in those days you could start teaching in the country schools before you got your degree. Her mother also taught country school. She taught in nine different country school districts, grades kindergarten-8th grade from 1950 until her retirement in 1976. Gerry went back to school to further her education attending summer school, and she finally received her Bachelor's Degree in education in 1971. She got to teach her children kindergarten - 2nd grade in a one room country school, with no running water, and an outdoor privy. Gerry mastered the piano, playing all the songs for the annual Christmas programs she had in the country school during her teaching career. She also sold Avon for many years, earning the Top Sales Award several times. Geraldine is survived by her children: Robert (Rosemary) Sladky, of Waverly, and Edna (Bill) Fencl, of Bruno; five granddaughters; three grandsons; and 23 great-grandchildren. She is preceded in death by her parents; and her husband: Math. In Lieu of Flowers: Memorials have been suggested to Masses Lunch will be served immediately following the burial at St. Mary and Joseph Catholic Church parish hall in Valparaiso.

Geraldine T. Sladky, 84, of Lincoln, died Tuesday, September 20, 2016 at Lancaster Rehabilitation Center in Lincoln, Geraldine was born on May 6, 1932 in Wahoo, NE to Hubert and Philomena(Kantor) Meduna. She was an only child. Gerry was baptized,... View Obituary & Service Information

The family of Geraldine T Sladky created this Life Tributes page to make it easy to share your memories.

Send flowers to the Sladky family.