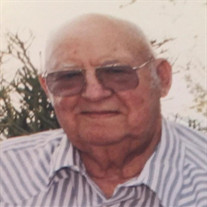 Gerald D. Selden, 86, of Rising City, passed away February 3, 2019 at David Place in David City. IN LIEU OF FLOWERS AND PLANTS: Memorials to Family Wishes. Gerald was born February 17, 1932 to Lester and Mildred(Pool) Selden on a farm near Rising City, Nebraska. He graduated from Rising City High School in 1949. On June 17, 1952 he was united in marriage to Dorothy Forcade-Nalezinek at St. Wenceslaus in Wahoo. Four children were born to this union. Gerald started out farming and cattle feeding with his dad, then became a co-founder of Selden Trucking in 1983. He drove his truck for many years, and enjoyed hauling cattle. He was a member of the Rising City School Board, Circle Mound Cemetery Board, Co-op Elevator Board, Rising City Fire Department, and the Rising City United Methodist Church Board. He was also a 4-H Leader for the Rising City Livestock, a member of the Masonic Lodge, and the Shrine. Gerald was proud of his association with the Roadrunners, who transported children to the Shriners Hospital in Minneapolis. He also enjoyed the Motor Corp Parade Group with the Shriner's. He liked to go fishing in Canada, spend time at the cabin at the lake, the morning coffee club in Rising City and Shelby, and attending his kids' and grand kid's sporting events. He loved Husker sports and had season tickets to football games since the 1960's, where he also tailgated and met alot of great people. It gave Gerald great joy to haul football equipment to Husker away games. Gerald is survived by his wife of 66 years: Dorothy, of Rising City; children: Deb Selden, of Bellevue, NE, Monte Selden, of Shelby, NE, his children and grandchildren: Ashley Selden and Lainee, Brandon(Megan) Selden and Rowdy, Travis Batenhorst and Shayla Favors Batenhorst, Konner Batenhorst, Kody Young, Ryan(Wendy) Batenhorst and Elena and Kendall, Corey Batenhorst and Damon, Carley and Colby; Kirk(Patty) Selden, of Rising City, NE, and their children and grandchildren: Carrie(Brad) Carter and Alexa, Rylie, Jaxon, Reese and Chase, Shane(Ryan) Pavlik and Kira and Reid, Jaime Selden and Jonah; and Linda Sederburg, of Plattsmouth, NE, and her children and grandchildren: Josh(Danielle) Lowry and Kaydence, Willow and Wren, and Ben Sederburg; sister: Genon Crook, of Rising City. He is preceded in death by his parents; son-in-law: Michael Lowry; and brother-in-law: Kenneth Crook.

Gerald D. Selden, 86, of Rising City, passed away February 3, 2019 at David Place in David City. IN LIEU OF FLOWERS AND PLANTS: Memorials to Family Wishes. Gerald was born February 17, 1932 to Lester and Mildred(Pool) Selden on a farm near... View Obituary & Service Information

The family of Gerald D. Selden created this Life Tributes page to make it easy to share your memories.

Send flowers to the Selden family.