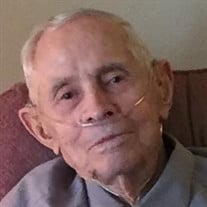 George McCracken, 90, Seward, formerly of Rising City, died Tuesday, June 2 at the Butler County Health Care Center in David City. IN LIEU OF FLOWERS AND PLANT TRIBUTES: MEMORIALS TO FAMILY WISHES. George McCracken was born on January 4th, 1925 on the family farm, seven miles southeast of Beaver Crossing, NE to Hugh and Goldie (Gentry) McCracken, the sixth of eight children and passed away on June 2nd, 2015 at the age of 90 years 5 mo. As a young boy he attended country school District #3 in Seward County through the eighth grade. He was a good speller and participated in the Seward County Spelling Bee in the sixth grade. He attended Beaver Crossing High School and graduated in 1943. After graduation he remained at home to help support his younger siblings and his mother who was widowed in 1934. The times were tough during the thirties and were known as the "dust bowl". On May 5th, 1945, George was united in marriage to Margaret Ebers at the Methodist Church in Beaver Crossing. George farmed and Margaret taught rural schools. They were blessed with one son Tom. On March 6th, 1950 they moved to a farm northwest of Rising City where they lived until retiring, moving into Rising City in 1990. George continued his hobby of collecting lamps, mainly Aladdin lamps. He and Margaret attended many of the Aladdin Gatherings in the Midwest and made many friends. George also enjoyed Canadian fishing trips with his friends over the years. He was interested in genealogy, and over the years he found some good stories, which won't be repeated here. He was a member of the United Methodist Church, the Eastern Star, and the Masons. He is survived by his wife: Margaret, of Rising City; son: Thomas (Viki) McCracken, of Rising City; grandchildren: April Iwan, of Columbus, Cory McCracken, of Rising City; great-grandchildren: Haley Mason, Braedyn, Camdyn, and Kasha Iwan, of Columbus; sister: Ruth Robinson, pf Boulder, CO; sisters-in-law: Doris McCracken, of Seward, Maxine Scully, of Issaquah, WA; brothers-in-law: Dr Dale (Gloria) Ebers, of Lincoln, NE, Robert (Jan) Ebers, of Mansfield, TX, and many nieces, nephews, and friends. He was preceded in death by his parents; sisters: Wilma (Kenneth) Weber, Norma (Arthur) Ricenbaw, Dorothy (Jim) Ricenbaw, Lorraine (Norval) Hansen: brothers: Art (Norma) McCracken, Don McCracken, and brothers-in-law: William Scully, and Harvey Robinson.

The family of George McCracken created this Life Tributes page to make it easy to share your memories.

Send flowers to the McCracken family.