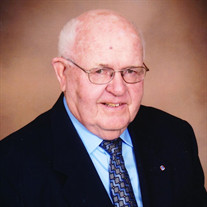 George E. Cunningham, 76, of David City passed away Sunday, January 21, 2018 of cardiac arrest, at McAllen Texas Medical Center. In Lieu of Flowers: Memorials to Family Wishes. George was born on May 6, 1941 to George M. and Eythel(Shaw) Cunningham, in Rockwell City, Iowa. After growing up in Lincoln, Nebraska and graduating from Pius X High School in 1959, George attended the University of Nebraska at Lincoln. He was united in marriage to Marie Baker on June 30, 1962 at St. Patrick's Catholic Church in Lincoln. Six children were born to this union and they were blessed with a foreign exchange student who became family. George spent most of his life in the Rural Public Power business, working his way up from lineman to operations manager to general manager. This job took him and his family from Grand Island, Stanton, Grant, and to David City where he retired in 2003. Post-retirement; George kept busy with golf, travel, FCSLA(Secretary-treasurer), David City Rotary Club, St. Joseph's Villa Board, City Planning Commission, Knights of Columbus, David City Golf Club, NREA Managers Association, and many other clubs and associations. He was a member of St. Mary's Catholic Church, and served on the Parish Council. He was also a part time funeral associate for Chermok Funeral Home. George is survived by his wife: Marie; children: Susan Umholtz, of David City, Sondra Cunningham-Schuetz, of Omaha, Patrick(Deb) Cunningham, of South Bend, Staci(Matt) Palmer, of Omaha, David(Julie) Cunningham, of Stanton, Michael(Ashley) Cunningham, of Papillion, and Matias(Melina) Goñe, of Buenos Aires; 19 grandchildren; 13 great-grandchildren; sisters: Catherine Bender, and Ann Marie Schnieber; and many nieces and nephews. He is preceded in death by his parents.

The family of George E Cunningham created this Life Tributes page to make it easy to share your memories.

Send flowers to the Cunningham family.