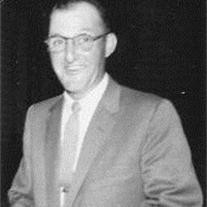 George Benesch, 92, of Linwood, died Friday, January 13, 2012 at Golden Living Center in Schuyler. A private family memorial service will be held at a later date. George Otto Benesch was born on February 24, 1919 at Schuyler, Nebraska to Otto and Marie(Resl)Benesch. He attended school at District 1 in Butler County and graduated from Schuyler High School. George served in the U.S. Army during WWII and saw action in the Battle of the Bulge. He earned the Combact Infantry Badge and the Bronze Star. He returned home with the rank of Technical Sargent. In 1959, he entered into the gravel business and continued until his retirement in 1992. He was a member of the American Legion, Veterans of the Battle of the Bulge, a life member of VFW Post 5814 of David City and the Last Man's Club of Schuyler. George married Fern L. Stroud on September 12, 1956 at David City. Five children were born to this union. He is survived by his wife: Fern, two sons: George R and James G both of Schuyler, and two daughters: Julie M. Anshasi of Lincoln and Jennifer Lee of Omaha. Eight grandchildren: Vanessa, Veronica, Cody, Keli, Stephanie, Julianna, Laureano, and Zach, and four great-grandchildren. He is also survived by one sister: Olive Ingram and one brother, Otto(Ben)Jr. and several nieces and nephews. George was preceded in death by his parents, an infant son, one brother, Daniel, and one sister: Mary Ann Benesch.

The family of George Benesch created this Life Tributes page to make it easy to share your memories.

Send flowers to the Benesch family.