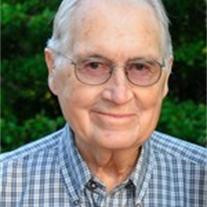 Fred S. Helman, 86, of Lincoln, formerly of David City, passed away Thursday, February 18, 2010 in Lincoln. A Funeral Mass will be held at St. Mary's Catholic Church in David City at 10:00 am Monday, February 22, 2010 with Fr. Bernard Kimminau, celebrant. Visitation will be at Chermok Funeral Home on Sunday, February 21, 2010 from 3 - 5 pm and will continue after 6 pm at St. Mary's Church, followed by a Rosary at 7 pm. Burial will be at St. Mary's Cemetery in David City. Fred was born in Brainard, NE on January 28, 1924 to Frank and Mary (Moravec) Helman. He graduated from Brainard High School. On October 8, 1945 Fred married Lucille Jisa at Assumption Church in Dwight. They moved to David City in 1964. Fred sold and delivered gas for Farmers Co-Op. He also worked for Burlington Railroad, but his true love was being a farmer. In 2007 Fred and Lucille moved to Lincoln. Fred was a member of St. Mary's Catholic Church and a member of the Knights of Columbus. He is survived by his wife, Lucille of Lincoln, son and daughter-in-law: Gary and Donna Helman of Lincoln, daughters and sons-in-law: Marcene and Ron Polivka of Lincoln, Carol and Tom Bogner of Gilbert, AZ, Karen and Bill Tredway of Lincoln, and Bonnie and Bob Schulte of Omaha. He is also survived by a brother and sister-in-law, Joe and Rita Helman of Brainard, and 14 grandchildren and 11 great-grandchildren. Fred was preceded in death by his parents, brothers: Albert, Adolph, Frank and Jim Helman, and sisters: Helen Krenk, Rose Hottovy, Mary Sypal, Lillian Brym, Amelia Novak, Agnes Swanda and Alice Behne. Masses or Memorials may be made "In Care of the Family.

The family of Fred Helman created this Life Tributes page to make it easy to share your memories.

Send flowers to the Helman family.