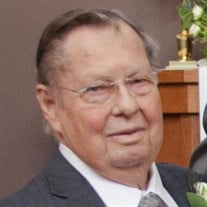 Frank Wesley Boggs, 85, of Lincoln, formerly of Rising City, was called to his eternal home by his Savior Jesus Christ on December 4, 2021 at Bryan Medical Center East in Lincoln. Through his faith, he now resides in the presence of God and His house where Jesus prepared a room for him. Memorials have been suggested to: Mount Olive Ev. Lutheran Church (Lincoln), Faith Ev. Lutheran Church (Rising City), and to Nebraska Lutheran High School (Waco, NE). Frank was born April 20, 1936, to Frank and Verna Boggs (Hansen) in Santa Monica, California. During his childhood he spent his summers in Harrison, NE with his grandparents where he became fond of ranching and farming. He graduated from Santa Monica High School in 1954 and attended the University of Nebraska Lincoln where he met his future bride, Arda. On September 8, 1957, he was united in marriage to Arda J. Ostermeier at Zion Ev. Lutheran Church in Garrison, Nebraska. In December of 1957 Frank was taken into membership at Mt Olive Ev. Lutheran Church in Lincoln, NE. Frank and Arda established their first home in Lincoln, NE as he finished his studies at UNL. In the spring of 1958, he graduated UNL with a degree in animal husbandry and received his commission as Second Lieutenant in the USAF. In the fall of 1958, Frank and Arda moved to Yokota, Japan where he served as an officer in the USAF during the Cold War. In 1962, Frank and Arda returned to the US and made their home in Santa Monica, California. Frank worked for his father at Boggs and Mc Burney Auto Parts in Santa Monica and West LA. In the later 60s he entered real estate sales in Santa Monica and Malibu. Frank volunteered in many capacities at his church, Gethsemane Ev. Lutheran, Los Angeles, (now Hope Lutheran) serving as congregational chairman and in many other positions on the church council and committees. In February of 1974, the family moved back to Rising City to Arda’s parents’ farm where he and Arda farmed for the next 25 years. During those years, he served on the church council at both Zion and Faith Ev. Lutheran. Frank was known for his herdsmanship and enjoyed raising beef on his family ranch in Harrison. In 1998 Frank retired from farming and moved to Lincoln and assisted with his son’s business, Q-Comm. Frank was a member of St. Mark and later Mt. Olive Ev. Lutheran Churches where he volunteered on committees at both congregations. During his years in Nebraska, he and Arda enjoyed traveling to many places in the world. He enjoyed keeping up on the technology of the family business. He enjoyed Bible study and letting others know what Jesus had done for them. Frank is survived by his son and daughter-in-law Gregory and Barbara Boggs of Lincoln; daughter Lori Rathje of Lincoln; 4 grandchildren: Michael (Katy) Boggs, Stephen (Chelsey) Boggs, Matthew Rathje, and Alex Rathje; 3 great-grandchildren: Grayson Boggs, Tristin Boggs, Fenwick Boggs; brothers-in-law Merle Struebing and Ron Stark; and nieces and nephews. He is preceded in death by his wife Arda, parents and two sisters, Shirley Mc Chesney and Arlynn Stark.

Frank Wesley Boggs, 85, of Lincoln, formerly of Rising City, was called to his eternal home by his Savior Jesus Christ on December 4, 2021 at Bryan Medical Center East in Lincoln. Through his faith, he now resides in the presence of God and... View Obituary & Service Information

The family of Frank W. Boggs created this Life Tributes page to make it easy to share your memories.

Send flowers to the Boggs family.