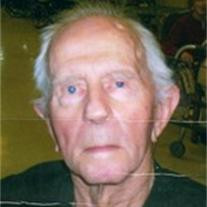 Francis H. Lukassen, 93, of David City, passed away Sunday, November 29, 2009 at St. Joseph's Villa in David City. A Prayer Service will be held at 8:00 pm Wednesday at Chermok Funeral Home. Cremation - no viewing. A Rosary will be held at 9:30 am Thursday 12/3/09 at St. Mary's Church in David City, followed by a Memorial Mass at 10:00 am. Inurnment in St. Mary's Cemetery. Francis is the son of Theodore and Augusta (Kosch) Lukassen. He is the husband of 66 years to Lucile (Gillespie) Lukassen. He is the father of Doris (Allen) Shambrook, John (Donna) Platte, Tom (Judy) Burmood, Jane (Bernard)Buresh), Linda (Dick) Ronkar, Ted (Jeanie) Hein, Kathy (Jeff) Martens, and Lori (Rick) Bock. Francis is the grandfather of: Fred, J.D. (Penny Martens) Bob, Lisa, Eric, Bill (Tracy Cole), Deb (Chris Knudsen, Greg, Vonda (Glen Crisp), Kurt, Kyle, Kristi (Brandon Behrens), Robin, Jim, Ryan, Victoria (Colby Perry), Jaason, Jessie, Jennie, Keith, Candice, Adam, Amber and Nolan. Francis is the great-grandfather of Stevie, Nicholas, Christopher, Samantha, Stephen, Logan, Brianna, Travis, Trenton, Cody, Spencer, William, Eden, Vincent, Austin, Sammuel, Elliana, Alexus, Ashley, Madison, Nevaeh, Mikah, Devon, Lukas, Abrigail, Aliyah, Kaleb, and Hunter. Each one was very special to him. Francis grew up the second youngest in a large farm family. his father coming from Holland and his mother from Austria. Theodore had 4 children with his first wife, Anne (Kosch). He lost her and 3 of their children over a short time due to tuberculosis. He then married Augusta (Kosch). Together they had 11 children. This union suffered the loss of 3 children to black scarlet fever in 1914. As a child, farm life for Francis and his younger sister Sally, seemed to be one adventure after another. Older sisters, Anne and Minn and older brothers Fred, Hank and Leo were there to help their parents with most of the work. There seemed to be endless hours enjoying life on their farm in their big white house and close enough to town to walk or ride a horse to get in on a lot of good times with the town kids. Their horses were their best friends and many hours were spent riding with neighbor children. The horses took the work out of sledding the big hill as the kids would get a free ride back up with a horse pulling them. As older siblings married and started families of their own and their parents began to age, Francis and Sally took on more responsibilities, always making plenty of time for fun with family and friends. Francis carried his love and devotion to family with him as he married Mom and raised 8 children of their own. Nothing was more important to them. Year after year vacations were coordinated to spend family time together, boating, swimming and moro cycling or just setting around the camp fire at hte little acreage on the east end of "E" street that was always home . After retiring Francis and Lucile spent several winters in California, experiencing LA and Harvest times in Dix, Nebraska, enjoying farming and friendship with a nephew, Jim and Bonnie and family. Always read to travel to see kids and grandkids near or far. Francis was preceded in death by his Father in 1943 and Mother in 1950. His oldest sons, John and his wife Donna died as a result of a boat accident in 1990. Also preceding him in death were his brothers, Hank, Fred and Leo and sisters (ANnn) Timony , Minn (Shonka and Leona. Francis is survived by his Lucile, of David City, sons, Tom (Judy) Lukassen of Kenosha, WI, and Ted (Jeanie) Lukassen of David City; daughters: Jane (Bernard) Buresh of David City, Linda (Dick) Ronkar of David City, Doris (Allen) Shambrook of Mission Viejo, CA; Kathy (Jeff) Martens of Bellwood and Lori (Rick) Bock of Columbus; 24 grandchildren, 28 Great-grandchildren and one sister, Sally McLaughlin of David City.

Francis H. Lukassen, 93, of David City, passed away Sunday, November 29, 2009 at St. Joseph's Villa in David City. A Prayer Service will be held at 8:00 pm Wednesday at Chermok Funeral Home. Cremation - no viewing. A Rosary will be held... View Obituary & Service Information

The family of Francis Lukassen created this Life Tributes page to make it easy to share your memories.

Send flowers to the Lukassen family.