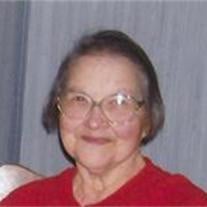 Frances C. Trouba, 76, of Dwight, died Sunday, January 6, 2013 at the Butler County Health Care Center in David City. Funeral Mass will be 10:00am Wednesday, January 9, 2013 at Assumption Catholic Church, Dwight with Fr. Jerel Scholl officiating. Burial will be in the church cemetery. Viewing will be Tuesday, from 4-7pm followed by a 7pm Rosary all the church. Additional viewing will be Wednesday, from 9-10am at the church. IN LIEU OF FLOWERS: Masses Frances C. Trouba was born on March 11, 1936 at Bruno, Nebraska to Joseph and Helen(Koranda)Husak. She married Sylvester Trouba on May 23, 1955 at St. Anthony's Church, Bruno, Two children were born to this union. Frances was a member of the Assumption Altar Society and she loved to sew, cook, bake and spend time with her grandchildren. She is survived by her husband, Sylvester, one son: Jim Trouba of Dwight, one daughter: Barbara(Ben)Divis of Abie, NE, three brothers: Richard(Gladys)Husak; Louis(Marcella)Husak both of Columbus, and Alois(Marge)Husak of Grand Island, NE; one sister-in-law: Charlotte Husak of Columbus; 3 Grandchildren; 2 great-grandchildren and 3 step-great-grandchildren. Frances was preceded in death by her parents, one sister: Alice Tupy and two brothers: Lad and Joseph Husak.

The family of Frances Trouba created this Life Tributes page to make it easy to share your memories.

Send flowers to the Trouba family.