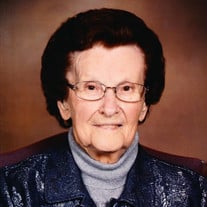 Frances Kastl, 93, of David City, died Saturday, May 13, 2017 at St. Joseph's Villa in David City. Memorials: In Care of the Family Frances was born on December 19, 1923 at Prague, Nebraska to Frank and Mary (Kubr) Belik. After high school graduation, she went on to receive her teacher's certificate and taught school for several years. She went to work at Henningsen's Egg Plant as a lab tech, working until she retired. She married Theodore F. Kastl on June 2, 1945 and nine children were born to this union. Frances was a member of the Ss. Cyril and Methodius Church, Plasi and the Plasi Rosary Society. She moved to David City in the mid-1980's and became active in St. Mary's Church, the PCCW, had a holy hour for many years, and a member of the Seminarian Club. She was a proud member of the Quilter's group at the David City Senior Center, a group, whose proceeds were donated to the Aquinas Guardian Angel Fund. Frances enjoyed quilting, traveling, raising flowers, gardening, canning, cooking, baking kolaches, visiting with friends and family and if you came to visit she would make sure that you were fed before you left. She loved children, especially her grandchildren and great-grandchildren. Her smile and warmth as well her often spoken phrase, "I do too, love you" will be missed by all. Frances is survived by her children: David (Kathy) Kastl of Wahoo, Ted (Kathy) Kastl of Lincoln, Ben (Jackie) Kastl of Weston, Valerie (Bill) Witzel of Dwight, and Tim Kastl of Bruno. 19 Grandchildren and 41 Great-grandchildren. sister-in-law: Lillian Belik of Omaha and many nieces and nephews. She was preceded in death by her parents, her husband, Theodore in 1976, two infant daughters, Mary and Bernice, son, Bernard and daughter, Patsy. one grandson: Chris Kastl, two brothers: Ernest and Frank Belik and three sisters: Irma Chmelka, MaryAnn Welniak and Dolores Zavodny.

Frances Kastl, 93, of David City, died Saturday, May 13, 2017 at St. Joseph's Villa in David City. Memorials: In Care of the Family Frances was born on December 19, 1923 at Prague, Nebraska to Frank and Mary (Kubr) Belik. After high school... View Obituary & Service Information

The family of Frances E. Kastl created this Life Tributes page to make it easy to share your memories.

Send flowers to the Kastl family.