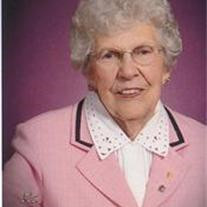 Fern Stryker-Gustad, 100, of Rising City,died Friday, October 19, 2012 at David Place in David City. Funeral Services will be Tuesday, October 23, 2012, at 2:00pm in the United Methodist Church at Rising City with Pastor Mark Schutt officiating. Burial will be in Circle Mound Cemetery. Viewing and visitation with family will be Monday, 5-7pm at Chermok Funeral Home. Additional viewing will be Tuesday, from 1-2pm at the church. Memorials to the Rising City VFD. Fern(Rowan) Stryker-Gustad was born in Gothenburg, Nebraska on August 14, 1912 to Benjamin and Maggie(Roten) Rowan. Fern grew up in the sand hills north of Gothenburg in Roten Valley. This valley was named after her great grandfather who was one of the first settlers. Fern graduated from Gothenburg High School with Normal Training to qualify her to reach in the Roten Valley District #19 school. Fern committed her life to serving the Lord as a youth. She attended the local country church, Morning Star Methodist, where Fern became friends with the Stryker family. She was eventually introduced to their cousin Henry Stryker from Rising City. They were married on August 18, 1931. To this marriage 3 daughters were born, Floy, Ardis, and Verna. Henry passed away in November of 1962. Fern was a good house wife, farm wife, hospitable neighbor and a friend to all. She was a diligent mother and grandmother. She was awarded the Good Neighbor award of Butler County in 1995. Fern enjoyed sewing, crocheting, and quilting. All of her children and grandchildren have a quilt made especially for them. She started quilting when she was only 13 years old. Fern loved to travel and wore out several cars going to any event that she enjoyed, especially the grandkids' events. Her goal was to go to all of the states including Alaska and Hawaii. Fern also worked at Dale's Electric for 9 years. After marrying Milton Gustad of Parker, South Dakota, they traveled and completed the list of states. They enjoyed playing cards with friends. Milton passed away in February of 1978. Fern loved being a servant of Christ in her community and the United Methodist Church. She served in many roles on the local and state level of the United Methodist Women's organization. Fern was a member of the Farmers Wives Society, Eastern Star, Rebecca Lodge and various other groups. She is survived by daughters: Floy(Gary) Kilgore of Omaha, Ardis(Leonard) Rosenberry of Lincoln, and Verna(Dan) Drayer of Colorado Springs, CO. Step Daughters: Lonita Carothers of Sioux City, Iowa and Roberta Gustad of Honolulu, Hawaii. Grandchildren: Joseph(Jenna) Slavik of Denver, CO, James(Lisa) Slavik of Beaverton, OR, Julie(Chris) Pawol of Rogers, AR, Kimberly(Rick) Shaneyfelt of Omaha, NE, Kara Rosenberry of Denver, CO and Lane(Ruby) Rosenberry of Lincoln, NE. Nine great-grandchildren: Jason, MEgan and Rachel Slavik of Denver, CO, Kathryn and Jacob Slavik of Beaverton, OR, Colette, Elle, Sophia, and Nicholas Shaneyfelt of Omaha, NE. One niece: Kathy Beldon. Nephews: Bob and Ted Rowan and Sister-in-law Doris Rowan as well as numerous friends and relatives. She is preceded in death by her parents, Husbands Henry Stryker and Milton Gustad; Two brothers: Earl and Walter Rowan.

The family of Fern Stryker-Gustad created this Life Tributes page to make it easy to share your memories.

Send flowers to the Stryker-Gustad family.