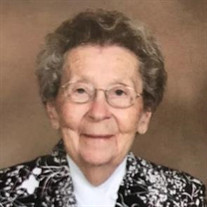 Eveliene B. "Evie" Daro, of David City passed away Tuesday, January 16, 2018 at St. Joseph's Villa in David City at the age of 92 years, 6 months and 16 days. Memorials: In Care of the Family Evie was born on June 29, 1925 to Ernest and Catherine (Kucera) Fricke on the farm SE of Rising City. She was the oldest of 9 children. Evie attended District 70 School until the 4th grade and then attended District 33. She went to David City High School, where she boarded with Mrs. Whitezel during the week, working in the kitchen. When she did extra work, she earned a dime which was enough for her to buy a ride home on the "motor" (train) for the weekend. The summer of her graduation (1942), she earned her teaching certificate at the University of Nebraska and taught at North Olive District near Bellwood, while she lived with her Aunt Molly and Uncle Albert Janak. She was united in marriage to Walter H. Daro on November 26, 1945 in New Mexico. Nine children were born to this union. They farmed near Ulysses until 1960, after which they moved to Garrison. Years later, they divorced and Walt passed away on November 10, 1985. After the children were older, Evie worked several jobs, but her favorite job was typing out delivery receipts for M&S Transfer. She took pride in learning how to use the computer and continued in this position for 10 years. She was baptized and confirmed in the Catholic Faith which was very important to her. She was an active member of St. Francis Parish in her earlier years and later a member of St. Mary's Parish in David City, where she belonged to the Guild and Seminarian Club. She was extremely proud of her grandson, Rev. Mr. Douglas Daro. Although she didn't live long enough to attend his ordination, she had the joy of receiving Holy Communion from him at his Diaconate Ordination Mass in May of 2017. Evie loved life and was a people person. She belonged to the Union Extension Club for many years, thoroughly enjoyed eating lunch at the Senior Center and was a regular at Northside, having coffee with her friends and discussing the latest news. We couldn't count the numerous birthday parties, softball games, family celebrations and picnics she attended. Regarding family picnics, Evie was one of the first ones there to "get the coffee going" and one of the last to leave after cleaning up. Her picnic specialties were fried chicken, potato salad, chocolate pie...and oh, a box of Bugles. Evie is survived by 7 children: Norm Daro of Cody WY, Jim (Jolene)Daro and Bill (Susie) Daro both of Garrison, Jackie (Ben) Kastl of Weston, Russ (Loretta) Daro of David City, Barb Ingwersen of Bellwood and Linda (Gordy)Robinson of Garrison, 34 Grandchildren, 65 Great-grandchildren with two more due to arrive in 2018, and 3 Great-great grandchildren, former daughter-in-law: Jean Dishman of North Platte, special family friend: Dorothy Velikaneye, Brother: Ben (Arlene) Fricke of David City, Sisters: Rose Marie Kobza of Omaha, Arliene (Joe) Kobza of Lincoln, Ramona Davis of Sedalia, MO, Marilyn (Zeke) Zegers of Lincoln and Anna Mae (Rodney) Powell of Syracuse, NE, and numerous nieces and nephews. She was preceded in death by her parents, 2 sons, Donald and Thomas, son-in-law, Bill Ingwersen, 2 brothers: Christopher and Garfield Fricke, and two brothers-in-law: Richard Kobza and Robert Davis, and special family friends, Sandy Walbert and Joe Kucera. Evie was privileged to be the last of the Daro family connection of her generation. Evie's love for her family was her legacy. Her memory will be cherished forever.

Eveliene B. "Evie" Daro, of David City passed away Tuesday, January 16, 2018 at St. Joseph's Villa in David City at the age of 92 years, 6 months and 16 days. Memorials: In Care of the Family Evie was born on June 29, 1925 to Ernest and Catherine... View Obituary & Service Information

The family of Evie Daro created this Life Tributes page to make it easy to share your memories.

Send flowers to the Daro family.