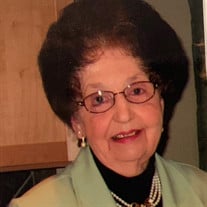 Evelyn "Evie" Dvorak, 92, of Brainard passed away on May 15, 2019 in Lincoln, Nebraska. Evie was born on August 25, 1926 to Max and Rosie(Kulhanek) Dusatko who resided on a farm north of Brainard. At the young age of four, she began her elementary education at a rural school, District 8. Her high school years were spent at Brainard High. Following her high school education, she enrolled at the National Business Institute at Lincoln from where she graduated with a degree in Secretarial Science. Following graduation from NBI, she was employed at the Agricultural Statistician's office in Lincoln. She later worked at the American Red Cross office based at the Lincoln Army Base. Her position of secretary was interrupted when her brother, Edwin, was drafted to serve his country in World War II and where was a need for Evie to return to the farm to assist her parents with the farm work in his absence. It was in October of 1946 that she married Edwin Dvorak. They resided on a farm southwest of Brainard where they pursued the vocation of farming for many years. Two children were born to this union; Judy born in 1948; Vern born in 1951. In 1981, Evie and her husband built a new house on the original Dvorak farmstead, located one mile south of Brainard. It was after the death of her husband, in 2003, that she moved to Brainard, where she has resided since. When hard times hit in the 50's, Evie sought employment out of the home, first working at Henningson Egg Plant; she then worked in the East Butler Cafeteria for several years, and for five years she commuted to Lincoln working as an MTST operator at the Game and Parks Commission office. In 1973 she was hired as Administrative Secretary at East Butler and remained there for fifteen years. Evie was a member of the Holy Trinity Church her entire life. She was a member of the Holy Trinity Guild and the Parish Council of Catholic Women, and held officer positions in both organizations. She enjoyed numerous hobbies. She especially enjoyed cooking, baking, cake decorating, gardening, writing, assisting with church activities and her family and friends were very dear to her heart. Survivors include her children: Judy Dvorak Groshans, of Lincoln and Vern(Kathy) Dvorak, of Brainard; 8 grandchildren; 10 great-grandchildren with one on the way; 3 great-great-grandchildren; sister: Marvene Bruner; sisters-in-law: Louise Dvorak Templeton, Delores Dvorak Sedlak, Delores Dvorak Dvorak; and many loving nieces and nephews. Preceding Evie in death were her parents: Max and Rosie Dusatko; her husband: Edwin in 2003; brother: Edwin Dusatko; sister: Leona Janak; father and mother-in-law: Louie and Helen Dvorak; and brothers-in-law: Dennis Dvorak, Richard Janak, David(Gladyce) Mitchell, Leon Sedlak, Ray Templeton, Pee Wee(Ernest) Bruner. Memorials may be made out to the family for later designation.

Evelyn "Evie" Dvorak, 92, of Brainard passed away on May 15, 2019 in Lincoln, Nebraska. Evie was born on August 25, 1926 to Max and Rosie(Kulhanek) Dusatko who resided on a farm north of Brainard. At the young age of four, she began her elementary... View Obituary & Service Information

The family of Evelyn "Evie" Dvorak created this Life Tributes page to make it easy to share your memories.

Send flowers to the Dvorak family.