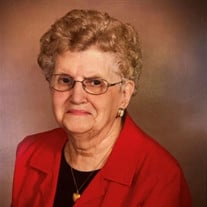 Evelyn L. Birkel, 89, of David City died Sunday, May 16, 2021 surrounded by her family at her residence. IN LIEU OF FLOWERS, PLANTS OR STATUES: Memorials may be given in Care of the Family. Evelyn Lillian Birkel was born November 9, 1931 to John Cuba and Helen Swerczek Cuba in rural Genoa, Nebraska. She lived on the farm and attended school through the 8th grade. On August 29, 1950 she was united in marriage to Harold J. Birkel. To this union nine children were born. They resided in Genoa until 1969 when they moved to David City, Nebraska. She held various jobs throughout her life, retiring at the age of 85 when she was diagnosed with cancer. Evelyn was a devoted and loving wife, daughter, sister, and mother, as well as a woman of simple, deep faith. She prayed countless rosaries, and 25 years ago, she took on Morning, Evening, and Night prayer from the Liturgy of the Hours. Growing up on the farm and learning to cook from her mother helped her to become a wonderful cook. Having nine children to feed gave her the practice to elevate her skills to a higher level. There was always enough food for the kids and any of their friends that showed up at supper time. No one was ever turned away from her table or went away hungry. Her true passion in the kitchen was baking. She was happiest when her home was filled with the aroma of delicious food baking in the oven. Her kolaches, coffee cakes, and cinnamon rolls were legendary. A grandson may have put it best when he said, "Whatever Grandma makes that I happen to be eating is my favorite." She enjoyed Cornhusker football, couponing, and visiting family. She even made a three week visit to Rome and Venice. She was a savvy shopper and loved a good bargain. She looked forward to the weekly ads to take advantage of the specials to stock up on flour, sugar, and butter which she used daily. She was often told she probably used more of these staples than the rest of David City. She was truly happiest in her kitchen and when that kitchen was full of people she could feed. Even though it was one of the smallest rooms in her home, that is where everyone gathered. It was where there were the biggest laughs and the most tears shed. She lived in her home until the end, which was her wish. This was made possible by the loving care of her family. The food and comfort offered by family members, especially Evelyn's daughters-in-law, Vi Birkel and Mary Birkel, were greatly appreciated. Words cannot express the gratitude the family has for her daughter, Sheila Walsh, and her niece, Shana Dinges. They dropped everything in their lives for these past six weeks to give her 24/7 care until the time of her death. Evelyn was preceded in death by her parents, her husband in 1983, sons Daniel and Matthew, granddaughter Katrina, brothers Leonard and Richard, and sister Phyllis Roth. She is survived by Al (Vi), Bradly, Sheila (Dan) Walsh, Denise (Dave) Johnk, Jim, Lane, and Reverend John Birkel, daughters-in-law Mary Birkel and Julie Paulson, twelve grandchildren, nineteen great grandchildren, sisters Genevieve Cuba, and Helen (Lee) Dinges, special niece Shana Dinges, as well as many other nieces, nephews, and cousins. With a heart as big as Evelyn's, it is no surprise that she was able to survive cancer far beyond the expectations of her doctors. The family wishes to thank Dr. Midathada and staff, Dr. Witter, Angel Homecare, especially Renee and Sarah, for their care and support over the past four years.

Evelyn L. Birkel, 89, of David City died Sunday, May 16, 2021 surrounded by her family at her residence. IN LIEU OF FLOWERS, PLANTS OR STATUES: Memorials may be given in Care of the Family. Evelyn Lillian Birkel was born November 9, 1931... View Obituary & Service Information

The family of Evelyn L. Birkel created this Life Tributes page to make it easy to share your memories.

Send flowers to the Birkel family.