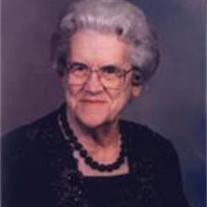 Eva M. Homan, 90, of David City, died Saturday, October 9, 2010 at St. Josephs's Villa in David City. Funeral Mass will be 10:00am Wednesday, October 13, 2010 in St. Mary's Catholic Church, David City with Fr. Bernard Kimminau officiating. PCCW Rosary/Wake Service will be Tuesday, 7pm at St. Mary's Church followed by refreshments in the school cafeteria. Catholic Daughters of America will have a CDA Rosary on Tuesday at 4pm at Chermok Funeral Home. Viewing will be Tuesday from 3-5pm at Chermok Funeral Home and after 6pm at the church, and on Wednesday, one hour before services at the church. Burial will be in St. Mary's Cemetery, David City. Eva M. Meysenburg was born on October 28, 1919 at David City, Nebraska to Nicholas and Mary(Gottschim)Meysenburg. Her father died when she was three and later her mother married Willam Lawson who raised Eva. She attended David City schools, graduating from David City High School in 1937. She married Benjamin Homan on January 20, 1942 and eight children were born to this union. She was member of St. Mary's Church, PCCW, Catholic Daughters of America, St. Mary's Guild, and Seminarian Club. She and her husband owned and operated Homan Appliance for 35 years in David City. She was a big sports fan, enjoying Husker Football and anything in which her children and grandchildren were participants. She was their biggest fan. Eva was a homemaker that loved to cook and bake and was known for her delicious kolache and pies. Eva Homan is survived by her sons: Jim(Linda) of Crete, Jerry of Brooklyn, New York, Bob(Theresa) of Omaha, Ne; Daughter-in-law: Patti Homan of Kearney, Ne; Daughters: Barb(Don)Oberg of Kearney, Ne; Mary(Rich)Gillespie of Shelby, Ne; Betty(Dennis)Medinger of Lincoln, Ne; and Carol(John)Brouillette of Hastings, Ne; one brother: Bill(Mary)Lawson of David City, Ne; 23 Grandchildren and 34 Great-grandchildren and several brothers-in-law and sisters-in-law, nieces and nephews. She was preceded in death by her parents, her husband Ben in 1997, one son: Ben Homan, one grandson: Joseph Brouillette; one brother: John Meysenburg and one sister: Marcella Eller. IN LIEU OF FLOWERS: memorials are suggested to the Aquinas Guardian Angel Fund, St. Mary's Catholic Church or the David City Volunteer Fire Department.

The family of Eva Homan created this Life Tributes page to make it easy to share your memories.

Send flowers to the Homan family.