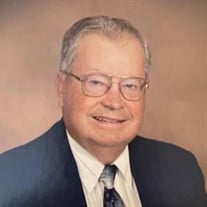 Eugene E. "Gene" Divis, 85, of David City died Thursday, March 3, 2022 at the Butler County Health Care Center in David City. Gene had requested Masses be offered for him in lieu of flowers, plants or statues. Thank you! Honoring Gene's wishes, there will not be a public viewing. Eugene E. "Gene" Divis was born on March 23, 1936 on the farm near Brainard, Nebraska to Albert and Ludmila (Kudlacek) Divis. He attended Oak Creek grade school north of Loma and went on to Brainard High School, graduating in 1954. On April 11, 1956, Gene married Darlene Kresse at Assumption Church in Dwight. Four children were born to this union. Gene worked as a dirt and land leveler, making terraces and dams, He also used dynamite on several occasions for his job. In 1961, the family moved to David City, where he eventually went to work for the city in the Street Department and later transferred to the Water Department, where he became supervisor. Gene retired from the city in 2001. After retirement, he went to work at Didier's Grocery, part-time, as carry out and stocker. Gene loved to talk to people and would speak Czech to anyone who he thought might understand. He enjoyed traveling and was able to visit most of the 50 states and even made a trip to the Czech Republic. He enjoyed spending time with friends and family. Gene is survived by his children: Russ(Bonnie) Divis, Rick (Mary) Divis, Reyne (Bob) Viergutz and Rhonda (Alan) Zavodny. one sister, Alice Havlovic, and 3 brothers, Donald (Connie) Divis, Albert "Bud" Divis and Edward (Rose Ann) Divis, 11 Grandchildren and 8 Great-grandchildren. He was preceded in death by his parents, his wife, Darlene on June 2, 2021, an infant sister, Eleanor, 2 brothers: Thomas and Leonard Divis, brother-in-law, Edward Havlovic, sisters-in-law, Martha Divis and Bernetta Divis.

The family of Eugene "Gene" E. Divis created this Life Tributes page to make it easy to share your memories.

Send flowers to the Divis family.